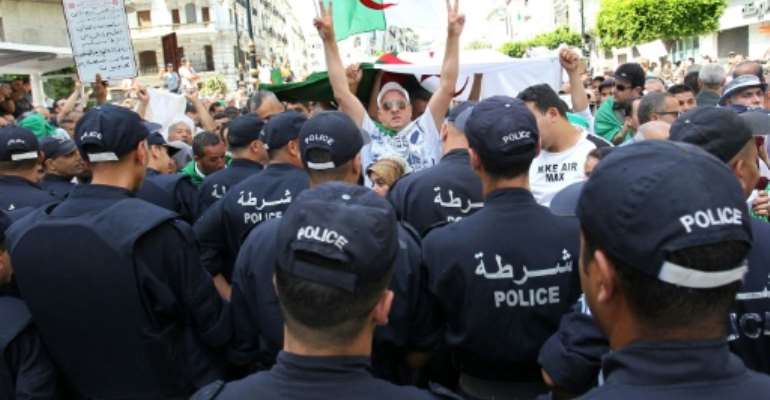 Algerian protesters face riot police during a demonstration in the capital Algiers in June. By - (AFP)

Algeria's military has ordered police to block protesters from outside the capital entering Algiers, the army chief said Wednesday, taking a tougher line after months of mass anti-regime rallies and ahead of December elections to fill a presidential vacuum.

"I have instructed the national gendarmerie to deal with these actions with firmness," said General Ahmed Gaid Salah, the country's strongman since the April resignation of longtime president Abdelaziz Bouteflika after months of street protests.

Gaid Salah said orders had been issued to stop "vehicles and coaches" used to bring demonstrators to the capital by seizing them and "fining their owners".

The ban was needed to counter "certain parties... with bad intentions" who were exploiting freedom of movement to "disturb the peace of civilians", he said.

He made the comments in his first public speech since interim president Abdelkader Bensalah on Sunday announced December 12 elections to resolve the political deadlock gripping the country since Bouteflika's departure.

The army chief has led the push for polls by the end of the year, despite mass protests demanding political reforms and the removal of the former president's loyalists -- including Gaid Salah himself -- before any vote.

Gaid Salah on Wednesday accused "certain parties" of using "freedom of movement as a pretext to justify their dangerous behaviour" and of "falsely claiming to be the voice of the Algerian people".

But the grassroots protests have shown no sign of waning, demanding constitutional changes and other reforms before a legitimate election can be held.

As on previous Tuesdays and Fridays since February, protesters massed in Algiers on the eve of the army chief's announcement, demanding the cancellation of the December vote and calling for key regime figures to step down first.

Officially, demonstrations had been banned in Algiers since 2001 but the prohibition had been ignored since rallies started on February 22 against the ailing Bouteflika's bid for a fifth presidential term.

The police have made multiple arrests in Algiers before the start of Friday rallies in recent weeks.

The army chief's latest decision drew a swift condemnation from Said Salih, vice president of the Algerian League for the Defence of Human Rights.

The move is "illegal" under the Algerian constitution which "guarantees Algerians civil equality and freedom of movement", he told AFP.

Bensalah's announcement of December polls came after protesters returned to the streets last Friday and protested against bills passed in parliament clearing the way for elections.

Presidential polls originally planned for July 4 were already postponed due to a lack of viable candidates, plunging the country into a constitutional crisis as Bensalah's 90-day mandate expired in early July.

The army's high command has rejected any solution to the crisis other than presidential elections "in the shortest possible time".