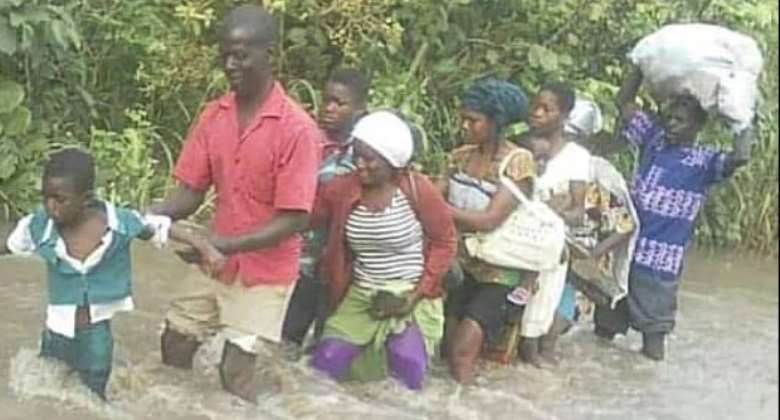 Commuters wading through the over flowing river

A heavy downpour has caused flood in Banda Boase, Biema and other neighbouring communities, causing damage to properties in the Bono Region.

Residents of Banda Boase and Biema have been cut off from the rest of the district due to the heavy rainfall yesterday. The roads from Banda Boase to Nsawkwa have been rendered inaccessible by the rains and also resulted in the Yoroweh River overflowing its banks.

Residents of the said communities are now facing challenges accessing neighbouring towns. Ama Serwaa, a resident of Boase, said the rains for some time now have cause disruption in their day to day activities. She said 'farmers cannot have access to their farms due to the flood caused by the rains.'

Serwaa further appealed to government to help reduce the level at which rains destroy property in the community.

Speaking with DAILY GUIDE, assemblyman for the electoral area, Paul Beka, indicated that the current distractions caused by rains have become perennial and it is really affecting lives in the Banda community and its neighbouring towns.

'We have only one Community Health Planning System (CHPS) compound in the whole electoral area, it therefore becomes difficult for the electorates to cross the river to access healthcare.'

Beka called on government through the Banda District Assembly to come to their aid by putting pressure on contractors to speed up work on the road.'