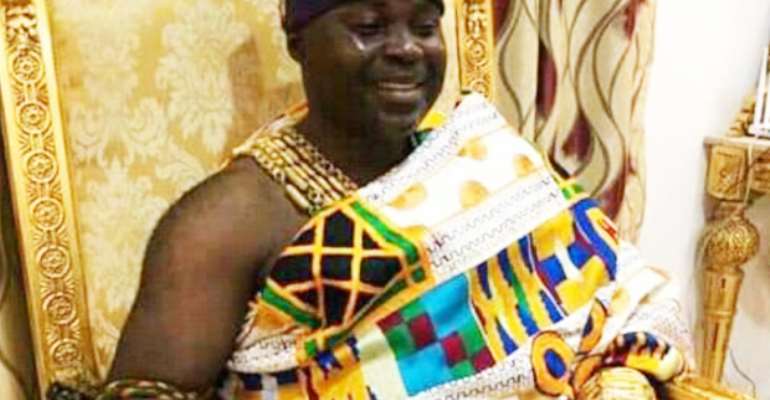 The Queenmother of Pakyi Number One, Nana Yaa Asantewaa Bonsu, is reportedly in police grip in Kumasi, the Ashanti Regional capital, in connection with the gruesome murder of Otumfuo's Asamponhene, Oheneba Kwadwo Aforduor.

Other reports indicated that Sadat Mohammed, nicknamed as 'Alhaji' or 'Mallam', the husband of the queenmother, who is the prime suspect, has also been grabbed by police from Kumasi in faraway Burkina Faso.

Sadat Mohammed, said to be a friend of the late Asamponhene, vanished into thin air immediately it was announced that Oheneba Kwadwo Aforduor had been cruelly murdered at Ebuom, near Ejura in the region on August 18.

The queenmother, whose name was not initially mentioned, among the suspects of the heinous crime, surprisingly, also vanished following the murder of the Asamponhene.

Her sudden disappearance, perhaps, gave the police the clue that she might be privy to the death of the chief.

So far, there have been conflicting reports regarding how the queenmother was apprehended.

From some quarters, she personally handed herself to the police to assist them in their investigations.

Other information indicated that the beleaguered queenmother was arrested on board a Burkina Faso to Kumasi-bound bus at Tamale in the Northern Region and she was rushed to Kumasi to assist police in investigations.

According to reports, the queenmother did not resist arrest and she had been in police custody in Kumasi since Monday.

The arrest of the queenmother has been described as a huge breakthrough for the police in the Ashanti Region, who are still gathering vital information about the real motive behind the chief's death.

Sources in the police said the queenmother had been co-operating with investigators ever since she was nabbed.

Meanwhile, reports suggested that the police from Kumasi and their counterparts in Burkina Faso were liaising to send Sadat Mohammed to Kumasi as of the time of filing this report on Tuesday evening.

There are reports that Alhaji or Mallam was in the company of the Asamponhene on the day that the traditional leader was found dead in his car on the outskirts of Ejura.

The Alhaji was with his wife (queenmother) and were initially thought to be hiding in Benin or Mali where the key suspect has other contacts.