The Advantages Of Destructive Criticisms 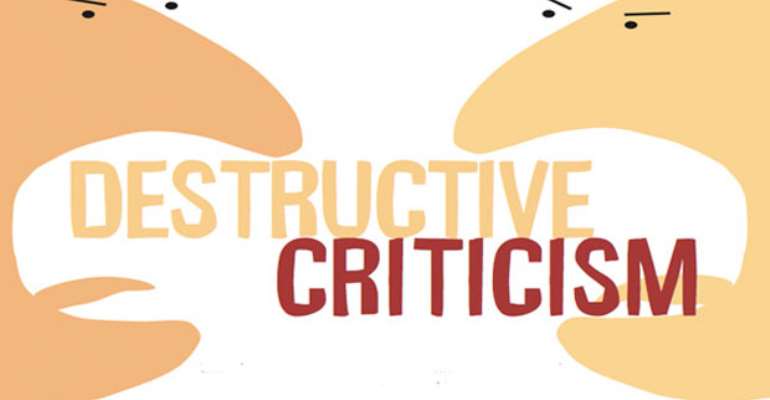 I have never feared destructive criticisms in my life. I simply love it because it encourages me to polish my antics and perform better. If people always praise you, you turn to be swollen headed and slip down the slop. Some politicians in particular easily fall into the trap when their opponents destructively criticize them. I am not the type.

In the run-up to the 2000 general election, candidate Kufuor crisscrossed the country preaching the gospel according to the criminal aspect of the cash and carry system of health delivery system introduced by then President Jerry Rawlings. According to Mr. Kufuor, it is criminal and wicked for patients who visit hospitals to be asked to pay down money before they are taken care of. According to Mr. Kufuor, it meant that if you did not have money, you will have to stay home and die untimely. He promised Ghanaians that when he was given the nod he would do away with the killer cash and carry.

What candidate Kufuor did not tell Ghanaians was how he was going to scrap the system which had been in operation for more than a decade. The man put his cards firmly on his chest while he kept his political opponents doubting how he was going to do it. That is a political chess game. You have to be very smart. If you do the mistake and put your cards on the table, you give your opponents that opportunity to steal the show. The NDC in particular got lost in the wood as far as the replacement of the cash and carry was concerned. They rather chose conspiracy theory as a weapon.

Out of desperation, candidate Atta Mills went to campaign in Wa in the Upper West Region and told his gullible NDC listeners that no one could scrap the cash and cash system of health delivery system because it had come to stay considering the rate at which the population was growing. He said candidate Kufuor was using the issue as a ploy to seek for votes from the people so they should ignore him and treat what candidate Kufuor said with the contempt that it deserved.

Immediately Kufuor was voted into power, he sent for one Philip Akanzige, the manager of the St. Theresa Roman Catholic Hospital, which had introduced the Mutual Health Insurance scheme at Nkoranza. Together with some expects, the government of the NPP introduced the National Health Insurance Scheme on pilot basis and before we could blink our third eye, they whole thing had become national and the good people of Ghana started clapping for President Kufuor. Suddenly, OPDs in all our hospitals became crowded and people even had to sleep there overnight in order to get treated. It was then, that we realized how desperately people needed medical care and how people died simply because they could not get access to medical care. The NDC was put to shame but because they do not have shame in their dictionaries, they did not mind a hoot.

In 2004, when the electioneering campaign started, then running-mate John Dramani Mahama went to Techiman in the then Brong Ahafo Region to campaign. Speaking at a local radio station called ASTA FM, he said when the NDC held the reins of power; government would introduce a one-term premium because the National Health Insurance as it stood then was not the best. He said what the system meant was that when you do not have money to pay for a particular year, it meant you would have to stay at home and die. That message sunk in so well that those who heard him voted massively for the NDC. In fact, the poor folks in the villages bought into the idea. After all, who would not like such a fine idea? By the grace of the Almighty God of Israel, who wanted to expose the lies of Mr. Mahama, Ghanaians voted for the NDC. For the eight years that they ruled the country they never introduced any one-term premium and neither did they even mention it to the hearing of Ghanaians

During the 2012 electioneering campaign, candidate Nana Akufo-Addo too told Ghanaians that when he got the nod he would introduce free SHS. This simple statement from candidate Nana Addo sent the NDC falling head over heels and jumped on the neck of the gentleman, calling him a cheap politician because it was not feasible for anyone to introduce free SHS. The said even Dr. Kwame Nkrumah who inherited enough money from the colonial masters could only introduce free education in only two regions in Ghana. As for Candidate Mahama he told Ghanaians that Nana Addo was seeking for cheap popularity because if anything at all frees SHS could be feasible in 20 years time.

Like his boss, ex-President Kufuor, he also kept his card firmly on his chest and kept promising Ghanaians that he will introduce the programme in September when he won the election and was sworn into office in January 7th. Truly and by the Grace of God, the first year students who got enrolled in the various Senior High Schools went to school free, with even day students enjoying free hot lunch every day. Then the NDC went to town again, calling Nana Addo a liar because those who were already in form two and three were not enjoying the free SHS. Nana Addo and his team kept silent and kept working for the good of the nation, particularly the younger generation. Today, as at the time I was composing this piece, students in form one, two and three are attending SHS “FREE BONTO”. So now what are these NDC empty juggernauts saying again?

Anytime I hear people like Sammy Gyamfi, the NDC National Communication Director twisting his already twisted month and condemning the One Village One Dam flagship programme, I always wet my pants with laughter. In fact, the people in the northern regions giggle whenever they hear him bastardizing the programme because they see contractors busy constructing these dams in their various villages. Many of such dams have already been completed and the people are using them. If the NDC in eight years had had such a fine dream and started building such dams, the job would have been easy for the NPP, but they chose to rear guinea fowls and allow them to fly away to Burkina Faso to return no more for the past ten years. If even they return today, I wonder how long it will take our wives to cook guinea fowls for us to be able to eat them. No wonder Vice President Dr. Bawumia teasingly told the NDC that we need dams but not Guinea fowls. And these are people who want to stage a comeback. Akai!!!