Afrophobia Is A Mental Disease Within Black People Too 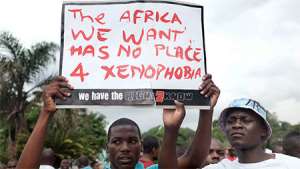 South Africa President Cyril Ramaphosa got a chilly reception at the burial ceremony of the Great One, Robert Mugabe. He was booed for Afrophobia exhibited against fellow Africans. Ramaphosa has since sent emissaries to neighboring countries, Ghana and Nigeria. We are still waiting to see how many people have been held responsible at home. South Africa brought Afrophobia into limelight about the continual unruly aggression towards their fellow Africans labelled xenophobia by many but actually Afrophobia.

Many countries have their own form of Afrophobia including China without defined descendant from Africa. The same is true, though no longer towards: Maltese, Italians and Greeks where they have their own darker people. The Southern (swarthy) Italians in United States are no more discriminated against as much since there are real Africans to take their place.

Africans are no more one another brothers’ keepers. The enemies of Africans right now are not too far from one another. Some Nigerians tried to point out that Afrophobia started when Ghana kicked Nigerians out in 1967 before Nigerians kicked them out in 1983. Of course, Nigerians are making distinctions between apples and oranges since Nigerians were never vicious, as South Africans. Tit for tat or lame excuse!

It does not ameliorate the disappointment and disenchantment of amicable people that have lived most of their lives in any place they have been acclimatized to; then all of a sudden are told to leave. Take the case of Africans that have lived together even before creation of countries where the same ethnic groups were divided into two or more countries.

These Africans attacks on one another and reprisals are unfortunate considering the crucial role played by Kwame Nkrumah of Ghana and Tafawa Balewa of Nigeria throughout Africa’s struggles with colonialism. Any Nigerian or Ghanaian hoping to reap rainchecks from the solidarity of Nigeria or Ghana from those past decades are not serious. These South African youths were not born then and the goodwill has become dim memories to those old enough.

They do not owe Nigerians or Ghanaians salvation of their destitute while they are struggling themselves. Indeed, no country can accept refugees from explosive population of Nigeria that cannot hold its leaders responsible for the amount of income being stolen out of that country.

The question is not what Nigeria or Ghana had done for each of these countries in the past but what Nigeria that cannot help itself, has done for them lately, apart from hiding loot there.

Think in terms of the relationships of estranged husbands and wives. While the husband or wife reminds the family what he or she had contributed. Just pray that you never need to or look forward to reward for your past favors. They would asked you: what have you done for us lately? Abi na yesterday we go chop today?

Nigeria is a good case in point. There is no reason whatsoever for that country that was blessed with fadaka, wara and honey to be in a state of stupor where many in a population of about 200 million should be seeking greener pastures in countries of about 30 million. This has to be checked otherwise Nigeria would overwhelm them with its explosive population. Who wants to lie down with an elephant?

The problem has always existed in South Africa between Black, Colored and Whites privileges. Generally, we can say black South Africans pick on those Africans that look more like them for the worst treatment in their major cities. They sought out not only Nigerians but Zimbabweans and other Africans in close proximity from neighboring countries. They are frustrated, no doubt, that they have not gained from the privileges of post-Apartheid. If they could not, how could foreigners and other Africans be doing better than them at home?

South Africa display of violence has always been there. So alarming, even against their women. Ramaphosa had apologized for his language before the Marikana massacre when police killed 34 striking mine workers on the 16th of August 2012, about his failure to insist on negotiations that led to the deaths. Violence against fellow Africans may have overshadowed the general violence that boils down to black on black crimes. Whites and other coloreds closer in complexion or Asians are generally spared the brunt of this violence, no matter where they are.

So, it could not be just xenophobia against foreigners but black on black crimes of self-hatred.

The reasons some claim, is the favorability of white to black skin. Self-hate are not far-fetched in world history, complicated by the enslavement and dehumanization of Africans into the new world. Even among fair white skin, there is a tendency to even look fairer. Cosmetic industries have capitalized on whiter complexion. The trend to whiter skin by African Americans and West Indians shows in their old preference for fairer, nicer hair and narrow noses: The Jacksons Plan.

While it is true that there are many criminals complains of financial and drug crimes against Nigerians, these criminals are few compared to professionals and businessmen living and fulfilling their duties honestly. But it does not make a difference, notoriety of some few always cloud majority of conscientious Nigerians and other African blacks worldwide. It has gotten to the point where Nigerian and other African governments are flying folks back from South Africa.

Even if all foreigners leave, there is another danger as lack of opportunities bite harder. Since they come after other Africans now, foreigners and South Africans from neighboring cities are not safe either because at some point, ethnic groups around cities will be demanding local jobs and privileges before others. Indeed, we have seen this in African countries when services and infrastructure are overwhelmed by neighboring fellowmen. Ask Nigerians after Ghana Must Go!

However, most African students do not depend on Ivy League colleges set-aside for African Americans. Africans and West Indians make up disproportionately more of the total black professional and college graduating classes at all American universities, including Howard University, the Premier Black College. It will be illogical then to claim that Black colleges discriminate against their own to accept African students on set-aside instead of merit.

Therefore, black insidious hate for one another is not limited to Africa but also raises its ugly heads in the Diaspora. There is nothing genetic about this as some mischievous scientists would like to claim. But the culture of poverty instituted from the top to oppress those at the bottom manifest self-hate regardless of color or country. Poor people find it more convenient to blame one another than to confront their oppressors dropping crumbs in barrels for them to fight over.

Feature Article
Powered By Modern Ghana
Trusted Demonologies: US Electoral Interference, the Proud Boys and Iran
The Enemies of Kennedy Agyapong (Hon) are my Enemies
Please, The Police; Good Cop, Bad Cop
Can I Still Be Healed? (2)
Lessons From the End SARS Movement
What Is The Best Way President Akufo-Addo Can Fight And End High-Level Corruption In Ghana?
For The Love Of Kumerica
This Is No Way To Treat A Former First Lady!
NDC Will Lose Election 2020 Because Mahama Is an Error and a Fraud
COVID-19 Updates Live Dashboard
TOP STORIES