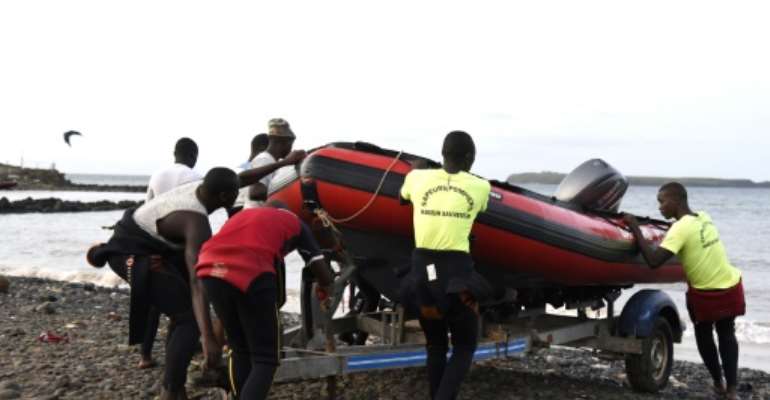 All the four victims were Senegalese. By Seyllou (AFP)

The death toll could rise as three passengers were said to be missing after the accident.

All the dead were Senegalese, officials and emergency services said. Two worked in a national park, one was a woman and the other victim was a child, Diatta said.

The boat was heading for the Madeleine islands, site of an offshore national park popular with tourists who travel from Dakar, coastal capital of the West African country.

Emergency services continued to look for those missing on Tuesday. AFP journalists saw a dozen divers at the scene.

Distressed families were waiting on the shore to get news of their loved ones.

"The gendarmerie called us at 5:00 am (GMT and local time). My brother was on the boat. The worst thing is not knowing," said Aminata Diop, who was among the relatives on the beach.

There are "four dead bodies and between three and four people are missing. Thirty-five people were on the boat. Search and rescue operations are continuing this morning," Interior Minister Aly Ngouille Ndiaye told AFP by telephone.

The causes of the accident were unclear. The interior minister told Senegalese media overnight that several tourists were worried about the heavy rains and wanted to return to the pier but others wanted to stay on the boat.

The survivors spent the night on the island, Ndiaye told local radio on Tuesday. Blankets and food were sent to them and they were to be ferried back to the mainland in the morning, he added.

The rainy season arrived late this year and heavy storms have resulted in several casualties this month.

Two fishermen were killed on their canoe in the same area nearly two weeks ago.