Saied, Karoui to face off in Tunisia's second round presidential poll 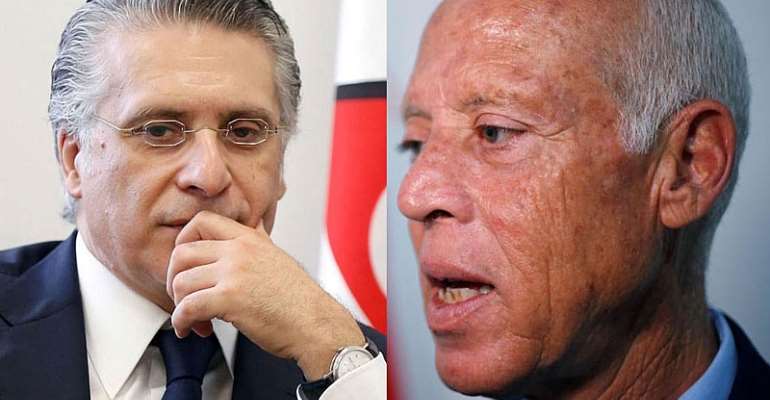 Little-known candidate Saied finished first with 18.4 percent of votes with Karoui came on 15.58 percent, according to ISIE, Tunisia's Independent Higher Authority for Elections.

The former defence minister Abdelkarim Zbidi, endorsed by secular parties Nidaa Tounes and Afek Tounes, and Abdelfattah Mourou of the Islamist Ennahda party, had been tipped to come in first – or even win outright – but they were several points off the leaders.

There has been no official date set for the run-off vote, but electoral officials said it would take place in October.

Here's a look at the two candidates:
– Kais Saied –
Nicknamed "Robocop" for his droning speeches, 60-year-old Saied is a professor of constitutional law, who often chooses to speak in classical Arabic rather than Tunisian dialect, as most candidates do.

He speaks using political and legal jargon, talking at length about political theories.

Of all the 26 candidates, his win in the first round is the big surprise of Sunday's vote.

Running as an independent with no party endorsement, his was an unconventional campaign – lacking the bling and blare that most candidates opted for.

During the debates, he expressed support for the death penalty and opposition to equal inheritance between men and women – a major legal achievement for women – and criminalisation of homosexuality.

He won favour during his campaign by taking public transport, travelling to often-ignored areas across the country, such as the interior towns of Kasserine or Sidi Bouzid – far from the affluent north.

He presented no platform of solutions, saying the constitution and the law would play its role in meeting the needs of the people, as expressed by the people.

"It's easy to say I will do this or that. But it's even easier when the people themselves express what they want through the national administration,” he said in an interview with RFI.

New revolution
Saied says a second revolution is taking place in Tunisia, and that the people now need concrete changes to the constitution.

“Voters have given a clear message and it's practically a new concept of the revolution within a legal framework,” he says, adding that the solution to today's problems is the youth – one of his main areas of focus during his campaign.

Decentralisation
The only way to make the youth voices heard, and others like them, is through a decentralisation of the government, according to Saied.

“The youth are capable of finding way to spread their programme. They have solutions. Those in Kasserine and in Sidi Bouzid, their solutions concern work, education, health. They have programmes, it's not the capital which will help them put forward these programmes. The capital must be the means to express what is needed at the local and regional level,” stresses Saied.

– Nabil Karoui –
The 55-year-old Karoui is the only candidate to hold his electoral campaign from prison, under the banner of his party Qalb Tounes: the Heart of Tunisia.

He was arrested shortly before the electoral campaign began on charges related to money laundering and corruption three years ago.

He cuts a divisive figure among the youth. As preliminary results trickled in late Monday in Hammamet, south-east of Tunis, young people at a café could be heard debating the pros and cons.

Over in one household, away from the tourist area, a family argued his virtues.

“He's a criminal! You can't trust him!” says one man in his 40s, while his mother, vouches for him as a good contender. "He's been arrested, not convicted," she says.

He used his media station to highlight work he had done through his charity Khalil Tounis, named after his son who was killed.

But many of his opponents say he violated electoral rules by using his station as a campaign tool.

At the start of the campaign, he promised a revolution at the ballot box in favour of the other Tunisia: the millions neglected by the establishment.

Stronger centralised power
Achieving his goal to care for the “millions neglected' would be done in contrast to Saied's push for decentralisation.

Instead, he wants to strengthen the central government to allow the state to restore the economy and deliver goods and services to the people.

On Facebook on Sunday during voting, he praised those voting for him for "saying no to injustice, no to poverty, no to marginalisation and yes to a fair state, yes to a better future, yes to hope".

In pre-revolution years, despite censorship, he was known for offering a platform to dissenting voices including former president Beji Caïd Essbesi, making him an icon of liberty amongst certain Tunisians.