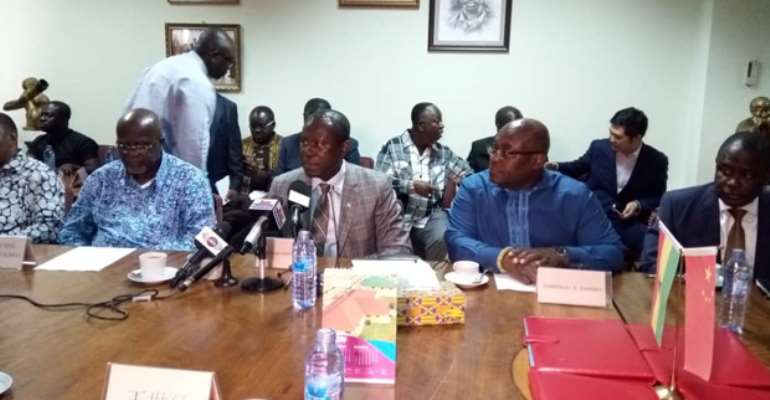 GHANA AND China have signed a Memorandum of Understanding (MoU) for the establishment of a cocoa processing factory at Sefwi Wiawso in the Western part of Ghana.

The project is projected to be a sino-Africa model as it is going to be the first of its kind in Africa.

It is a partnership between the Ghana Cocoa Board (COCOBOD) and Genertec International Corporation of China.

A high powered delegation from China comprising representatives of China Development Bank, China Development Corporation, was at the head office of the COCOBOD in Accra on Tuesday, September 17, 2019, for the signing of the MoU, that sets the pace for the establishment of the factory.

The plant is to be built at an estimated cost of $60 million.

About $35 million of the amount would be a grant from the Chinese government and the remaining $25 million would come from the COCOBOD as a matching fund.

The factory, when completed, would process 40,000 metric tonnes of cocoa beans every year for export, mainly to the Chinese market.

Speaking at the signing ceremony, Chief Executive of COCOBOD, Joseph Boahen Aidoo, said it was the policy objective of the Ghanaian government to ensure that not less than 50 percent of cocoa beans were added value to locally.

He said the factory would contribute immensely to Ghana’s economy.

The factory is important for a number of reasons…one being that it is for the first time the factory is coming closer to the people who produce cocoa in Ghana,” he said.

It is to also open the rural economy of the place and strengthen the cocoa supply chain,” he said.

One of its benefits, he said, was that it would add value to the cocoa beans we produce here in Ghana.

Ghana, he said, was currently processing 150, 000 metrics tonnes of cocoa locally per annum.

“Ghana is hoping to expand its cocoa production from 850,000 metric tons to 1.5 million in the medium term,” he said.

It is for this reason that Ghana welcomes the collaboration with Genetec, according to him.

The discussions on the need to establish the factory started about two and half years ago.

Ghana is the second larger producer of cocoa beans in the world. It is believed to be the number one producer of premium cocoa globally.

Members of the Chinese delegation pledged to work harmoniously with the Government of Ghana on the project.

They also highlighted that the Chinese Government always sees it as a responsibility to support African countries.

Present at the signing ceremony were Board Chairman of COCOBOD, Hackman Owusu-Agyemang, and the Chinese Ambassador to Ghana, Shi Ting Wang.