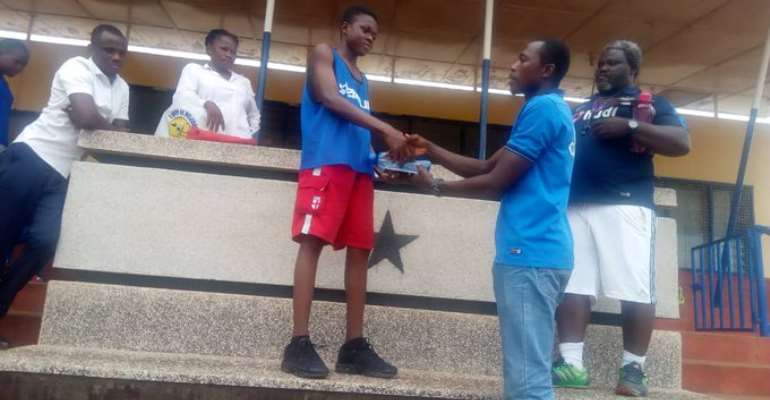 A Mini sports clinic was held over the weekend for 15 under 12 kids in the Ho Municipality.

The one-day event which was organised by the Tilda Acorlor Initiative took place at the Ho sports stadium and the Ho Tennis Court, it attracted yearning sports loving kids.

The sports clinic was aimed at coaching and mentoring young teens so as to inculcate and harness sports potentials in them while they are young.

Thirteen boys and two girls were introduced to basic skills in Tennis, Basketball and Football.

Tilda Acorlor Elinam, the director of Tilda Initiatives is hopeful the programme would whip-up sporting interest in the kids.

"I am very optimistic that this programme will expose these kids to various sporting disciplines and when they become professionals, they can run with it.” she said.

Miss Acorlor added that the objective of this programme is to expose and guide young teens to find success in sports.

“I realize most people have neglected sports development in kids and are focused on adults’ development which seems too late sometimes", Miss Acorlor said.

“Why don’t we nurture them from the scratch so they can be consistent, grow up and become better sports men and women and also chalk success as professionals as they grow” she queried.

Miss Acorlor said she was inspired by Richard Williams, Father of tennis stars, Serena and Venus Williams who coached and nurtured his children at a tender age to be tennis players and today the world can see the benefit and classic performances they display in the discipline.

“I am inspired by Richard Williams’s father of Serena and Venus Williams who decide to teach his children tennis and today the result is so glare as well as every other athlete that started young and chalking success. In their various sports” she said.

Mr. Daniel Agbogah, a coach and football administrator who was elated about the program said bringing the kids together to teach them basic sporting skills is ideal to unravel the sporting potentials in them to become great stars in the near future.

"These are kids who don’t know anything about football, Tennis and basketball but they have the interest and it is ideal to bring them together to unlock that potential in these little ones.”

A member of the 1999 National Under-17 team, Fafa Gbadegbe was around to encourage and share his experience at the national team with the participants.

"You can make it, be serious with your studies and train hard, the sky is your starting point". He said.

The 15 participants took home a water bottle and an exercise book each.

The Dream Project is an initiative of Tilda, a Sports Broadcaster under her Tilda Acorlor Initiative.

The Tilda Acorlor Initiative is a community support Initiative which focuses on sports development for children and communities.

The Dream Project is an annual sports clinic and monitoring programme which comes off every 14th of September to mark the birthday of Miss Tilda Acorlor Elinam.

The Tilda Acorlor Initiatives are also the organizers of the Night Street Soccer League in the Ho Municipality.