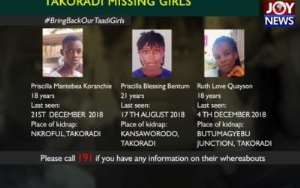 Families of the four missing Takoradi girls are demanding the resignation of the CID boss Maame Tiwa Addo Danquah Akuffo Addo and two others.

They also want the Minister in Charge of Security at the Presidency and Minister for Interior, Bryan Acheampong and Hon. Ambrose Dery to respectively resign.

According to spokesperson for the families, Michael Grant Hayford the security personnel insensitively dealt with the matter leading to the death of the girls.

“The three officers must resign with immediate effect,” he said.

In an interview monitored by Modernghana.com on Adom Fm’s political show ‘Burning Issues’, he said despite the “reckless” dealing in the matter the time and manner the report was released is wrong.

He argued that the police service’s psychological department could have been engaged. “They release a death report to the families who are already traumatised, do the police wish death for the family members as well?”

The families are skeptical about the report and has however decline the report. “We will not accept the report from the police,” he said.

The human remains were retrieved from a septic tank on a property previously occupied by the key suspect in the kidnapping of the three Takoradi girls, Samuel Udoetuk-Wills.