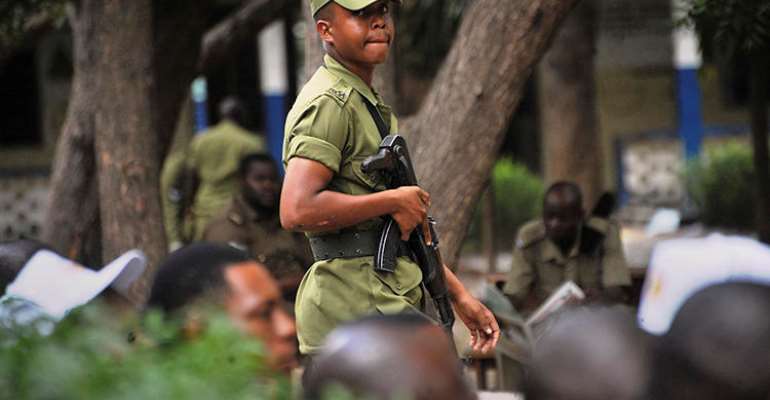 The Committee to Protect Journalists today expressed concern over Tanzania’s use of false news and journalist accreditation laws to arrest Sebastian Atilio.

On September 7, police in the central Iringa region arrested Atilio, a former reporter for Radio Maria Tanzania and Key FM Tanzania, over his posts in the Mufindi Media Group, a WhatsApp chat group, according to Atilio’s lawyer, Emmanuel Chengula, who spoke to CPJ on the phone. Atilio is one of three administrators of the Mufindi Media Group, a group chat with at least 170 members, including government officials, that features commentary on politics and social issues, Chengula said

On September 10, Atilio was brought to the Mufindi district court, which charged him with disseminating false news and working as a journalist without accreditation, according to Chengula and a charge sheet seen by CPJ. Prosecutors argued that Atilio disturbed the peace and should not be granted bail, claiming that it was for his own safety, and the court ordered that he remain in police custody until a bail decision could be made on September 18, according to Chengula and a court affidavit seen by CPJ.

The charges stemmed from a September 6 post Atilio made in the WhatsApp group, which alleged that villagers in Iringa may be forced to relocate to accommodate land claims made by Unilever Tea Tanzania, a private company, according to the charge sheet and Chengula. CPJ also found similar posts on Atilio’s personal Facebook page, but court documents only cited the WhatsApp posts.

Unilever’s East Africa corporate affairs director, Joseph Sunday, told CPJ in an email that “Unilever Tea Tanzania is neither a complainant nor an interested party in the case against” Atilio.

The East African Court of Justice has found that sections of Tanzania’s Media Services Act infringe on press freedom, and has directed the government of Tanzania to amend the law, as CPJ has documented . In April, Tanzania’s information minister, Harisson Mwakyembe, said the country would reconsider the law, according to news reports .

Tanzanian government spokesperson Hassan Abbasi did not answer CPJ’s phone calls or respond to text messages. When CPJ called Iringa police commander Juma Bwire, he asked for CPJ to call him back; when CPJ called later, he repeated his request to be called back at a later date. He did not respond to CPJ’s text messages.

Mufindi District Commissioner Jamhuri David Wiliam gave a press conference vowing to prosecute Atilio for using social media to spread false information damaging to investors and to Tanzania’s ruling party, according to a video of the conference uploaded to YouTube on the day of Atilio’s arrest.

In August, police in Iringa arrested another journalist, Joseph Gandye , also on allegations of publishing false news. Azory Gwanda , a freelancer, went missing in 2017, and the state has failed to carry out a credible investigation, while another journalist, Erick Kabendera , was arrested in July and is facing retaliatory charges of committing economic crimes.