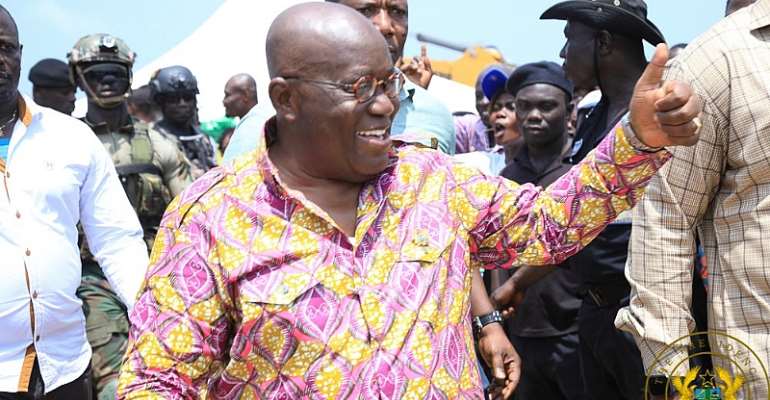 About three days ago, Friday, 13 September 2019, a gospel message for the attention of the President of Ghana, His Excellency Nana Addo Dankwa Akufo-Addo, was revealed to me while relaxing in bed, cogitating about how best the president can extricate himself from the numerous allegations of shortcomings being levelled against him by both his political friends and rivals.

At that moment, it just dawned on a gospel message. I was tasked to convey it to the attention of the president in case he would see a sense in, and find, it, as an escape route from all the numerously public perceptions, or realities, of corruptions and shortcomings, against him and his gone overboard number of government appointees.

Not being a spectator but a citizen; not being an enemy of the president and NPP but a selfless supporter and a friend by my actions and deeds, I have an inalienable right not only to voice out my concerns but also, to advise and offer suggestions to the president and NPP provided they will value the unsolicited free consultancy.

The gospel message was to sarcastically reprimand the president. It wants him to become conscious of one thing without permanently dwelling on his own devices to solving all the problems and some seeming malicious allegations of corruptions his political rivals or enemies are constantly stupidly levelling against him.

The message is from the gospels of Matthew 9:14–17, Mark 2:21–22, and Luke 5:33–39: A reference to the parable of Jesus of New Wine into Old Wineskins, “... And no man putteth new wine into old bottles: else the new wine doth burst the bottles, and the wine is spilled, and the bottles will be marred: but new wine must be put into new bottles”.

The relevance of this message is to inform the president that he is doing the right thing in dealing with corruption, thus, suspending his alleged corrupt officials and causing investigations into their alleged malfeasances or corrupt practices. However, believing that his referral of the alleged corrupt officials to the appropriate investigative bodies ends his personal participation in fighting against corruption and seeing that as a tick of success in overcoming corruption is a total fallacy.

Until speedy successful prosecutions or credible exonerations from blame at the investigations level have taken place, the president still has some job to do.

Why did we once have Public Tribunals or Fast Track Courts to deal with some cases? Was it not to speed up cases brought before the court? Everyone knows that institutional corruption is retarding, or militating against, the socio-economic development of the country. It is a canker that needs to be gotten rid of using any drastic measures as are possible.

What does fast track mean in law? “Fast Track Program Law and Legal Definition. Fast-track program refers to the speedy and early disposition program adopted to reduce the pendency of cases”

There was a good reason for creating the Office of the Special Prosecutor. The reason was to ensure that corrupt officials are speedily successfully prosecuted, convicted, and fined or jailed. This was because the traditional court procedure where cases are kept deferred for months, years or decades, without ever coming to conclusion, therefore giving perpetrators of crimes respite that emboldened them to continue to commit further crimes with impunity, was not good enough. There was then the need for a different approach hence the Fast Track Courts.

This is why I keep saying, every unique problem calls for a unique solution. The president has sought a solution for the corruption in the creation of the Office of the Special Prosecutor. Nonetheless, he did not go far enough. He should have created a Special Court for Corruption with special judges selected and given ultimatum to dispose of corruption cases brought before the court within a maximum delay of one month. This could have delivered positive results, quickening his resolution to deal a drastic blow to official corruption, the deadliest poisonous snake slithering along the corridors of the political arena, killing mother Ghana and depriving Ghanaians of the needed essential developments.

The money for economic development for the collective welfare of Ghanaians simply finds itself into the stinking deep pockets of some corrupt government appointees and some civil service heads.

To the president, I say, most Ghanaian electorates voted for him and NPP because of his track record of being a strict and disciplined person, and most especially, because of his promise to fight to rid Ghana of official corruption and also, to create jobs for the people. Many a Ghanaian was happy, and trusted him, to get rid of corruption or curtail it under his presidency. It seems the opposite is what we are seeing.

The Special Prosecutor has not successfully prosecuted a single “housefly” let alone, a human corrupt official. The Attorney General is sadly a complete misfit in her position hence has recently been sued by Hon Martin Amidu for failing to retrieve a €47 million judgement debt paid illegally to Waterville Holding (BVI) Limited, a company belonging to swindler Alfred Agbesi Woyome.

To conclude, the president must take notice that most Ghanaians voted for him in the hope that he could truthfully fight corruption as he promised. Currently, he is losing his battle against corruption even before it starts. Nobody has so far been successfully prosecuted! Among the 21 officials supposedly being prosecuted, which one of them is a politician?

Finally, the gospel message is telling the president to adopt new methods for dealing with corruption. Don’t rely on the old known corrupt system to deliver any acceptable results capable and able to nail official corruption in the coffin. Some of the judges are corrupt hence repeatedly postponing the cases before them until every Ghanaian gets peeved with President Nana Akufo-Addo to declare him a failure in his fight against corruption hence only good for riddance from the presidency come election 2020.

The cardinal pivot on which your year 2020 re-election message, strength and hope will revolve is how successfully you will have prosecuted or retrieved Ghana’s stolen money from the corrupt government appointees and Civil Service heads.