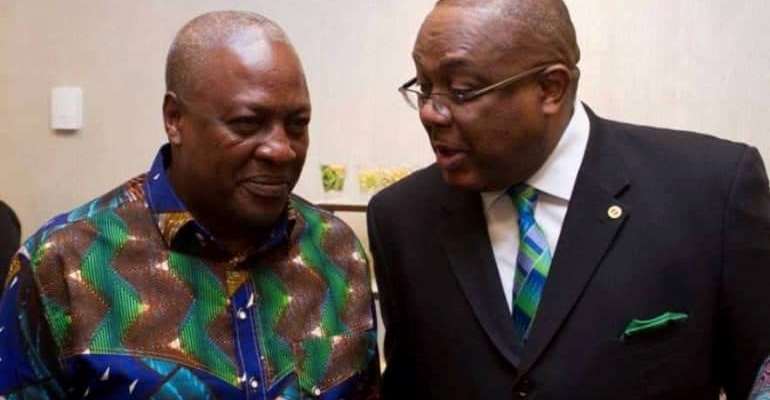 Former Eastern Regional Minister and a staunch member of the National Democratic Congress (NDC), Emmanuel Victor Smith says he can’t tell if former President John Dramani Mahama will consider him as his running mate for the 2020 general elections.

Ex-president Mahama was re-elected flagbearer of the NDC on February 23, 2019 after a keen contest in which he garnered a total of 95.24 per cent of valid votes cast leaving less than 5 per cent for his other six contenders to share.

After successfully electing Mr.Mahama as flagbearer to lead the party into the 2020 general polls, the National Democratic Congress (NDC) has another equally important decision to make which is crucial to the party’s successes in the upcoming national elections.

The NDC is required to select a competitive person to become the running mate to John Dramani Mahama.

Speaking in an exclusive interview with Boamah Darko,host of ‘Maakye’ on Accra-based Hot 93.9FM,with regards to whether he qualifies to be Mahama’s running mate,former ambassador Victor Smith indicated candidly that,though there are other people who can become a better running mate than him,he can’t tell if he will be chosen by Mr.Mahama.

According to the experienced diplomate, it’s the sole prerogative of the flagbearer to choose who he believes has the qualities of being his running mate.

Mr.Smith, emphasized extensively that, he vehemently believes in the vision of Mr.Mahama, and will really want to be part of his team that would spearhead the party to victory in order to save Ghanaians from the hardships Nana Addo and his NPP government have subjected the country to.

We’re Investing Massively In Infrastructure; Not Rearing Fly...
10 minutes ago

Mahama Shakes Tarkwa As Menzgold Customers Give Him Rousing ...
10 minutes ago