EU not impressed by 'Hulk' Johnson 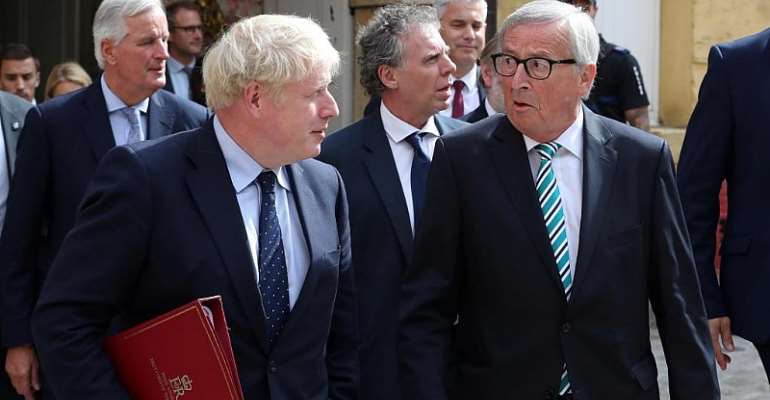 The first meeting between UK Prime Minister Boris Johnson and European Commission President Jean-Claude Juncker has ended without result. After failing to convince EU leaders he has a serious plan for a Brexit deal, Johnson dodged a scheduled news conference under a chorus of abuse from protesters.

Johnson traveled to Luxembourg to meet with Juncker in his home country and with the EU's chief Brexit negotiator Michel Barnier and Luxembourg Prime Minister Xavier Bettel.

Before setting off for talks in Luxembourg, Johnson had compared himself to comic book giant Hulk. But when anti-Brexit protesters gathered he left Prime Minister Xavier Bettel to field questions solo.

A visibly angry Bettel pointed in bitter amusement at the empty podium in front of the British flag beside him as he warned that Britain had failed to come up with any credible way to revive the Brexit withdrawal deal, telling the absent Johnson it was time to "stop speaking and act".

Written suggestions
After the brief talks with Johnson, Bettel was due to head to Paris for talks with France's President Emmanuel Macron, and he warned EU leaders will not postpone Brexit beyond October 31 if Britain does not come up with written suggestions soon.

"An extension is only an option it if serves a purpose," he warned.

For his part, once he was safely clear of the small crowd of British residents of Luxembourg who had gathered outside Bettel's office for the noisy protest, Johnson made brief remarks to British broadcasters.

"There was clearly going to be a lot of noise... and I think our points might have been drowned out," he protested, insisting he will never seek to postpone Brexit anyway and that he had made progress in agreeing to further talks with EU leader Jean-Claude Juncker and negotiator Michel Barnier.

Earlier in the day, Juncker, who had held a working lunch with Johnson, was downbeat.

The president of the European Commission said that once again the UK had failed to come up with a viable alternative to the so-called Irish "backstop" border arrangement.

"President Juncker recalled that it is the UK's responsibility to come forward with legally operational solutions that are compatible with the Withdrawal Agreement," a statement said.

Johnson has vowed to take Britain out of the bloc by the scheduled date of October 31, though parliament has ordered him not to do so without striking a deal with Brussels first.

Businesses and opponents of Brexit say leaving without a deal will cause economic chaos as Britain ends its open trade ties to the European Union after 46 years.

Meanwhile, Gibraltar's chief minister on Monday dissolved parliament and called a general election next month, saying the territory needs "strong leadership" ahead of Britain's scheduled departure from the European Union on October 31.

Speaking to a news conference, Fabian Picardo called for the vote to be held on October 17 to ensure a strong government was in place to tackle the fallout from Brexit.

"Gibraltar will need settled and strong leadership going into Brexit, especially if there is also to be an election in the UK and potentially in Spain thereafter," said Picardo who was elected for a second term in 2015.