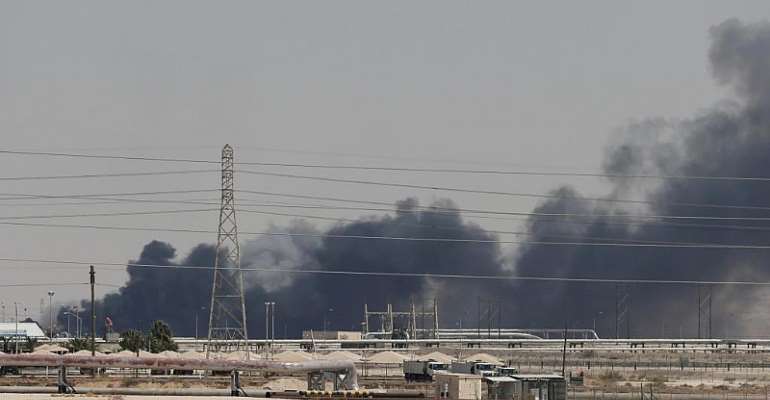 Oil prices have taken their biggest jump since the Gulf War after weekend drone attacks on Saudi oil facilities halved output in the world's top crude exporter. President Donald Trump warned the US was ready to respond to the attacks on its Gulf ally, claimed by Yemen's Iran-backed Houthi rebels.

Oil prices surged nearly 20% at one point on Monday, with Brent crude posting its biggest intraday gain since the 1990-1991 Gulf crisis, before paring gains to trade up about 10 percent on the day.

Trump said the US was "locked and loaded" in to respond to the latest attacks on Saudi oil facilities. He did not specify who the US believed to be responsible, but the attacks on Saudi infrastructure in Abqaiq and Khurais were claimed by Yemen's Houthi rebels, who are backed by Iran.

It's the first time has hinted at a potential American military response, fuelling fresh geopolitical and growth fears as oil prices surged.

Both the US and Saudi Arabia said they may tap their strategic reserves.

Russia on Monday called on "all countries to avoid hasty steps or conclusions that could exacerbate the situation", while the European Union stressed all sides should show "maximum restraint".

China also urged the US and Iran to "exercise restraint...in the absence of a conclusive investigation or verdict."

Iran denied any suggestion that it may have been behind the attack. Foreign Ministry spokesman Abbas Mousavi called Trump's remarks "fruitless and blind accusations...incomprehensible and meaningless”.

He also dismissing any lingering speculation that Iranian President Hassan Rouhani and US President Trump would hold talks during Rouhani's stay in New York for the upcoming UN General Assembly.

The recent sacking of anti-Iran hawk John Bolton as US National Security Advisor had brought about a relative lull in the Iran-US war of words, which led to suggestions that the pair may meet in New York later this week.

Return to war rhetoric
But after Saturday's attack, the belligerent rhetoric is back.

Yemen's Houthis – an Iran proxy, according to Riyadh – are locked in a five-year war with a Saudi-led coalition that is backed by the US, the UK and nine other countries. The US and France are among several nations supplying weapons to the coalition.

And US Secretary of State Mike Pompeo pointed the finger squarely at Tehran, saying there was no evidence the "unprecedented attack on the world's energy supply" was launched from Yemen.

Oil markets explode
The drone attacks abruptly halted the production of some 5.7 million barrels per day of crude – around six percent of the world's oil supply.

Saudi Aramco, the country's large state-backed oil company, said it was hoping to restore one-third of its disrupted output on Monday.

Brent crude futures on Monday rose from $6.21 to $66.43; West Texas Intermediate climbed $5.19 to 60.04. Earlier in the day, the surge in Brent prices recorded the largest one-day move ever.

Goldman Sachs warned that a long-lasting Saudi oil outage could force Brent crude prices north of $75 per barrel as the attack on the country's processing plant disrupts one of the globe's largest energy supply chains.