Niamey residents flee after the worst floods in 50 years 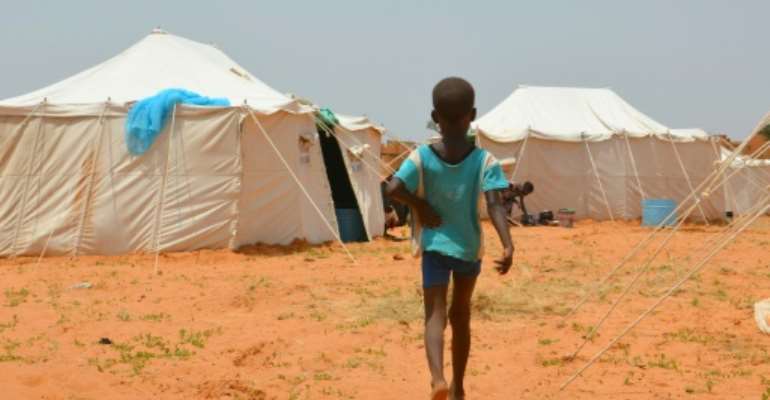 The floods were the worst to hit Niamey in 50 years. By BOUREIMA HAMA (AFP/File)

"At last, we're here!" Amina and Halima, who live in Niger's capital Niamey, exulted after reaching high ground following the worst floods to hit the city in 50 years.

Two weeks ago, authorities in Niamey declared a red alert when the waters of the Niger river -- the third biggest in Africa -- rose to a level "not seen in more than 50 years".

The floods have affected more than 6,300 people in the traditionally dusty city.

Nearly 60 have been killed and 130,000 displaced across the nation this rainy season, officials say.

Amina and Halima are among those who have been evacuated to tent shelters at Saguia in the highlands overlooking Niamey.

The women travelled in a van, but officials have been chartering all kinds of transport to move people in trouble, while others hire taxis, ride motorbikes and even walk.

Saguia is a patch of land owned by the army and usually off limits to the public.

In 2012, it was used to house about 400 soldiers from neighbouring Mali who had fled an offensive by Tuareg rebels.

For access to the site, people need "tickets" that are distributed in schools serving as transit centres for flood victims, according to the armed paramilitary police checking new arrivals.

The heights give a panoramic view of the homes and rice paddies largely submerged by the water.

'Surprised in our sleep'

Inside the camp, the fire brigade and municipal employees have put up dozens of white tents supplied by the Red Cross and the United Nations.

"When people arrive here, they are installed in tents (...) and we have enough food for them all," Niamey governor Issaka Assane Karanta told AFP.

A generator and a fresh-water well have both been repaired, lamp posts will soon be installed and a medical centre is open "for the treatment of emergency cases", the governor said.

Some 122 households, comprising 854 people, have been allocated tents and the site can take in a total of 1,200 flood victims, he added.

"They gave us rice, millet, mosquito nets, blankets and drinking water," said Aissa Salifou, putting on makeup in her tent, her head and shoulders covered in a broad veil. 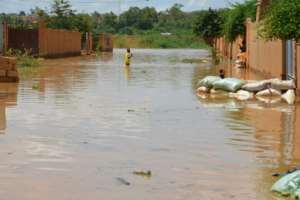 A child wades through muddy water early in September in the Kirkissoye district of Niamey, one of the worst hit by Niger river floods. By BOUREIMA HAMA (AFP/File)

"The water surprised us in our sleep," added the woman from one of Niamey's hardest-hit districts, Kirkissoye. "We had to demolish the walls in neighbouring houses to scramble out."

"We live on the low ground where we were trapped by the water, but this place is spacious, well-aired and above all safe," said Fatouma Boubacar, another Kirkissoye resident, watching her cooking pot on the fire.

Though Boubacar arrived only two days earlier, she has resumed her customary job, selling vegetables.

"I was lucky," said Ramatou Abdou, reclining in an armchair with a toothpick stuck between her teeth.

"I barely got out of the house before the roof fell in. I'm expecting my first baby in a month and I shall call it Saguia."

In the shade of a huge tree, a dozen new arrivals awaited the completion of their shelters before moving in.

Barefoot children meanwhile made up football teams and chased a rag ball on a makeshift pitch in the baking heat. 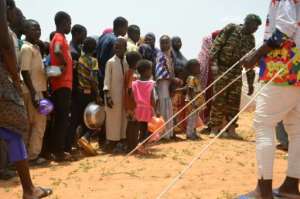 Children line up for food at the Saguia camp. By BOUREIMA HAMA (AFP/File)

On the far side of the camp, a policeman with a gun slung over his shoulder watched over a bunch of children carrying plates and queuing for a hot meal provided by an NGO.

"We're trying to live here and waiting to see what Allah has in store for us," Boubacar said.

The level of the Niger has fallen slightly after bursting its banks, but governor Karanta is urging people from affected areas to be watchful and "to keep well away from the bed of the river".

Upstream in Mali, technicians have opened floodgates on a major dam and the extra water is "slowly but surely" flowing down to Niger, Karanta said.