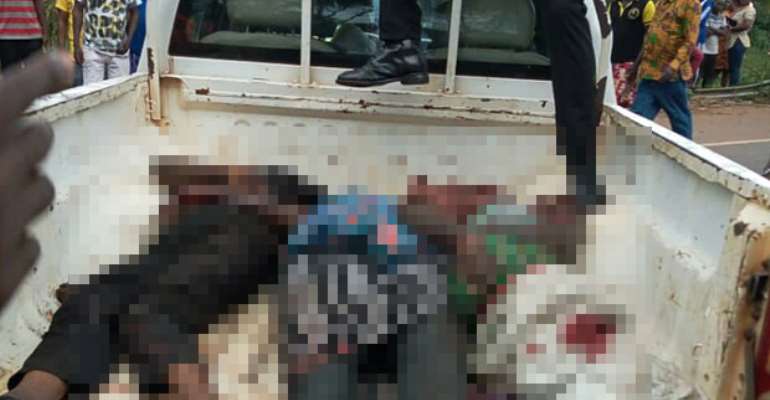 The deceased being conveyed to the mortuary

Eight persons have been confirmed dead in a gory accident on a sloppy part of the Kintampo-Techiman highway in the Bono East Region.

The dead included five persons who were on board a taxi cab with registration number BA 1356 P travelling from Kintampo to Techiman, and three on a Benz cargo truck loaded with chairs from the opposite direction.

Kwame Mensah, the driver; Kwadwo Sega, 50; Afia Pomaa, 25; Barikisu Alhasan and one unidentified passenger were on the taxi cab, while Yaw Offin, driver, 45; Osei Kwame, 50; and Philip Opopu Fofie, 26, were on board the Benz truck.

Six persons died instantly when the driver of the Benz truck lost control of the vehicle from the Techiman direction and collided with the taxi cab. Afia Pomaa and Kwame Mensah were rushed to the Holy Family Hospital in Techiman, but were pronounced dead on arrival.

The impact of the crash was so great that those in the taxi were trapped and it took the effort of rescuers to remove the bodies from the mangled cab.

All eight bodies had been deposited at the same hospital morgue for autopsy.

Explaining the circumstance that led to the accident, ACP Gyau told DAILY GUIDE that the Benz bus was descending a sloppy section of the Tuobodom stretch when the Benz driver lost control of the steering wheel, veered onto the opposite lane and collided with the taxi cab.