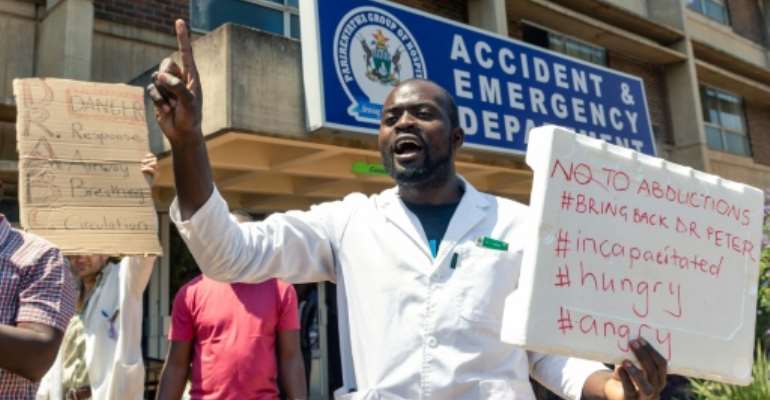 Zimbabwe doctors have taken to the streets to protest the suspected kidnapping of one of their labour leaders. By Jekesai NJIKIZANA (AFP)

Hundreds of Zimbabwean doctors and nurses marched in Harare on Monday to protest the suspected kidnapping of a doctors' union leader by security forces for organising a slew of strikes.

Peter Magombeyi has been missing since Saturday night, after sending a WhatsApp message saying he had been "kidnapped by three men", according to the Zimbabwe Hospital Doctors Association (ZHDA).

They believe he was taken because of his role in organising strikes to demand better pay and working conditions.

Doctors are paid less than $200 (180 euros) per month in Zimbabwe -- a country still struggling with hyperinflation and fuel and food shortages after decades of economic crisis under former president Robert Mugabe, who died a week ago.

The protesters chanted "No Peter, no work," in a second day of protests since Magombeyi's disappearance.

"This demo is about our president, getting him back won't get us back to work," said ZHDA's vice-president Masimba Ndoro, adding that the "pay issue" also needed "to be addressed".

Slogans on pieces of cardboard said "I am Peter, I'm your brother, bring me back" and "He is not a threat to national security".

Government spokesman Nick Mangwana said the administration had "no reason" to abduct citizens.

"We can't build a united nation when our doctors are underpaid & abducted when they raise legitimate concerns," Chamisa tweeted. "This defines a banana republic!"

Zimbabwe's police agency said it was investigating the case.

Before he disappeared, Magombeyi told AFP he had received threatening calls and messages on his phone.

"The poor pay is one thing, but now we don't even feel safe in our own homes," said doctor Busi Mlambo at the protest.

"When we go to work, it's difficult as we lack the basics to perform effectively."

President Emmerson Mnangagwa, elected after Mugabe was ousted in 2017, has been under pressure to deliver on promises of more investment and jobs.

A measure to double fuel prices this year sparked nationwide protests, prompting a crackdown on the opposition and clashes in which 17 people were killed when soldiers opened fire.