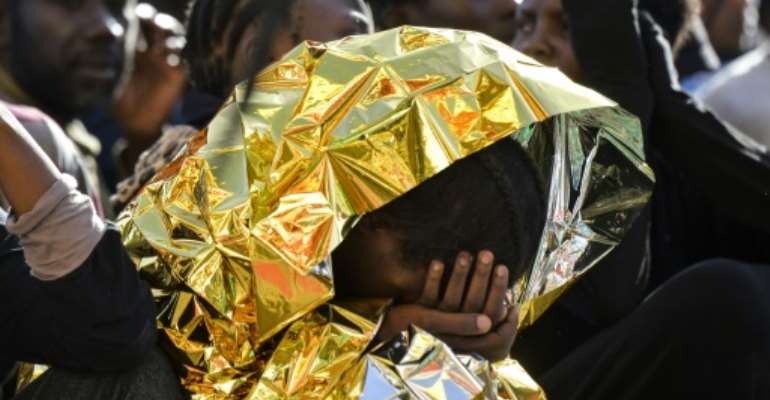 The UN and aid groups have warned that forcing intercepted migrants back to Libya means they risk rampant human rights abuses in both official and illegal detention centres. By ANDREAS SOLARO (AFP)

Italian police arrested three people Monday accused of the kidnap, torture and trafficking of migrants hoping to set sail from Libya to Europe.

Their accusers described a catalogue of abuse including the systematic rape of women and the murder of some migrants.

A 27-year old man from Guinea and two Egyptians, aged 24 and 26, were taken into custody in a detention centre in Messina, Sicily, after police gathered testimony against them from other migrants.

The arrested men had crossed the Mediterranean themselves, landing in Lampedusa before being transferred to Sicily.

Witnesses said the three ran a prisoners' camp in a former military base in Zawyia in Libya, where those ready to attempt the perilous sea crossing were forcibly held until they could pay a ransom.

Those interviewed said they had been "beaten with sticks, rifle butts, rubber pipes, whipped or given electric shocks", and had seen other prisoners die, police said.

They had also been refused water or medical attention for their wounds or for diseases contracted in the camp, they said.

Anyone unable to pay up was passed on to other traffickers "for sexual and/or work exploitation", or was killed.

The testimonies were gathered from migrants spread in reception centres across Sicily and on the island of Lampedusa.

"All the women who were with us... were systematically and repeatedly raped," one witness was quoted as saying.

"They gave us seawater to drink and, sometimes, hard bread to eat. We men were beaten to get our relatives to pay sums of money in exchange for our release," he said.

"I saw the organisers shoot two migrants who had tried to escape".

Another said he was "whipped by electrical wires. Other times I was beaten, even around the head".

One survivor described how the electric shocks "made you fall to the ground unconscious", adding that he had "personally witnessed many murders by electric shock".

Some migrants died of hunger, according to another cited witness, who described seeing a jailer "shoot a Nigerian in the legs for having taken a piece of bread".

Libya, despite being wracked by chaos and conflict since the 2011 uprising that killed the dictator Moamer Kadhafi, has remained a major transit route for migrants, especially from sub-Saharan Africa.

According to figures from the International Organization for Migration in July, at least 5,200 people are currently trapped in official detention centres in Libya, often in appalling conditions.

There are no figures for the number of people held in illegal centres run by human traffickers, who brutally torture them to try to extort money from their families.

Italy's tough line on migrants arriving from North Africa, and European Union cooperation with the Libyan coastguard, has seen some of those attempting the crossing picked up at sea and returned to the chaos-wracked country.

The UN and aid groups have warned those returned face rampant human rights abuses in both official and illegal centres.