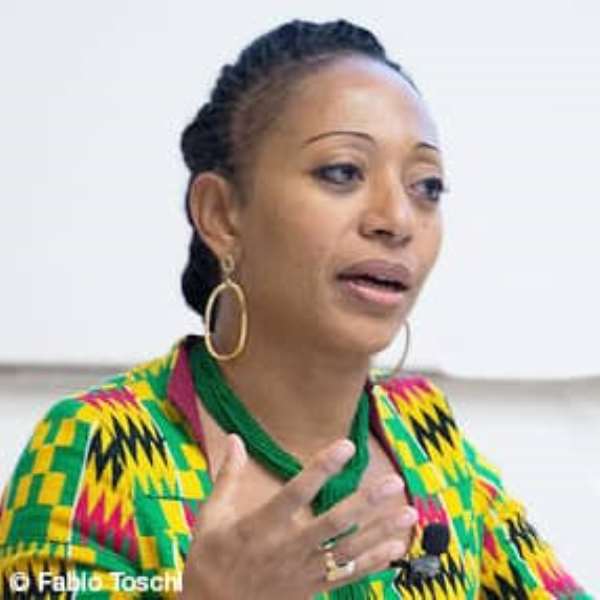 Former Convention People’s Party Parliamentarian for Jomoro in the Western Region and President of Kwame Nkrumah Pan Africa Center, Samia Yaba Nkrumah believes that if Africans and the world want to achieve their ambition of restoring a million hectares of land and create million green jobs by 2030 then women must be involved keenly in the decision process.

According to her inclusive authority and social justice at all levels protect the rights of all humans whether black or white.

“A future that avoids, minimizes, and reverses desertification and mitigates drought in affected areas at all levels is what we must fight towards and women must be intensely involved,” she said.

The President of the Kwame Nkrumah Pan Africa Center made the discourse in an exclusive interview with this reporter at the 14th Session of the Conference of the Parties to United Nations Convention to Combat Desertification here in New Delhi India. The Session was organized by United Nations Convention to Combat Desertification in collaboration with the government of India on the theme - Let’s move towards a greener future.

Samia Yaba Nkrumah indicated that to maintain and restore land and soil productivity, and to mitigate the effects of drought we must recognizes the unique role played by women in regions affected by desertification and drought, particularly in rural areas of developing countries.

“In many of the dry, agricultural areas of the world, it is traditionally women who devote time and effort to the land; grow, process, manage and market most of the food and other natural resources that come from the earth” she revealed.

The former Parliamentarian additional indicated that very often women are the poorest of the poor and lack the power and the opportunities to bring about real change. “Poor women in the drylands have frequently been conditioned to accept their disadvantaged positions. They are the most affected by desertification, and yet the least empowered to effectively address this challenge. They are often excluded from participation in land conservation and development projects, from agricultural extension work and from policies that directly affect their livelihoods” she said.

Samia Yaba Nkrumah believes special efforts must be undertaken to provide women with an enabling environment adding we must effectively address this global problem, it is of vital importance not only to provide women with technical and financial resources but also to promote and fully recognize their role as vital dryland stakeholders.

Korea Forest Service (KFS) Minister, Mr. Kim Jae-Hyun in a press briefing indicated that his Ministry has designed a policy called Peace Forest Initiative which will provide a practical platform that will encourage international alliance by demonstrating the value of achieving land degradation neutrality in cross-border and post-conflict situations.

Cooperative efforts on sustainable land management, forestry, and land rehabilitation can facilitate economic cooperation Kim said, “The initiative is in the early stages, and we are proposing it as a global initiative where actually all people living in border areas in many countries can participate” he added.

He indicated that the initiative would create more green jobs in the coming years and contribute to the alleviation of political tension, reconciliation and become a part of permanent peace-building processes between any two countries.

“The world seems divided because of borders but we can restore the ecosystem in border and conflict areas by the participation of local communities, the Peace Park between Ecuador and Peru is the proof that forestation brings peace, security, and goodwill among two countries,” he said.

“More than 10 billion trees were planted in Korea; it was possible through strong leadership, people’s willingness and participation” he whispered.

They brought together representatives from the African Union Commission, Government Ministers including those from countries participating in the Pan African Agency for the Great Green Wall Initiative; Prime Minister’s, Heads of COP Delegation from UNCCD parties, the UN, IGOs, regional actors; private sector stakeholders and Civil Society Organization’s.