Apathy Or Empathy: Do Ghanaian Really Love Their Country?

By Dr. Kwaku A. Danso 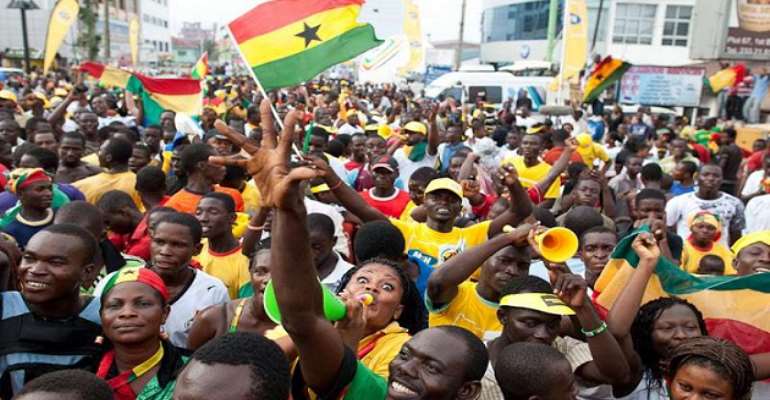 In the ancient Roman days men showed bravery and love for nation in many ways. One man, Gaius Mucius Scaveola, in the 6th century BC showed his bravery and dedication to nation by putting his right hand in a burning fire!

Nobody is asking the people of Ghana to sacrifice their hands for nation. However, oftentimes the impression is given that elected officials simply talk and don’t care for the people who elected them. Employees of Government also don’t seem to care, often motivated only by some bribe before they act. So what are you doing about it?

Last year I reported a case to the East Legon police only to watch two or three young men employees on duty listen to me like they were in a stupor without taking notes and without any sense of duty! I sure gave them my piece of mind.

Do Ghanaians really care to own a land called Ghana and fight for it?

In a discussion on the Ghana Leadership Union forum, I asked:

“Is the Ghanaian SPIRIT dead? Can you imagine 23 American Banks closed and the customers’ monies locked up and yet the media and society so quiet and peaceful? And then say 5,000 people let go from these Banks and the media not even asking how many have been rendered unemployed! Come oooon!!

America would be in flames within 2 weeks!!”
Another member wrote:
“It's like we've put ourselves in the care of uncaring people. If we do not respect ourselves and take care of ourselves, no one will.”

I take a little time to explain and elaborate for the records. Hopefully, it might wake up anybody reading and those who care about being a Ghanaian.

BEING GHANAIAN:
Defining ones self as a Ghanaian or member of any nation becomes like a Spiritual existence. In the PNDC era of 1982-1993 the members of the ruling military junta out of envy and sheer wickedness tried to disenfranchise or take the citizenship of some Ghanaians using the 1992 constitution.

In general and despite this, one will find that Ghanaians everywhere love and are proud of their country. For those in Ghana, its not that Ghanaians don’t care, but that they don’t see themselves as co-owners of the land or nation they live in. Our leaders have been simply too wicked over the years, and the people have allowed it! Ghanaians start caring more after they leave and live outside Ghana for some years.

A. On CARING and BELONGING:
The first societal observation is that Ghanaians don’t feel the people in Government care about them. In 1957 a Government of our own kind took over after 100 years of control by a foreign British Colonial Government.

History of our elders tells us that the resistance to colonial rule implied that Government was an alien and sometimes hostile entity. We have local proverbs that even suggest that working for the white man’s job is not the same as working for one's self. The Psychological transition from Colonialism to Independent Ghana in 1957 did a wonderful job to inspire some of us; but it did not last even one generation.

Ask yourself:
1. When was the last time a Government office responded to your phone call or email inquiry?

Government of today simply doesn’t show much personal concern for people! Even tax increases are done without consultation and without Public dialogue by leadership.

2. When was the last time any Government asked how many in Ghana are hungry and without jobs or disabled? Sure we have Social Services,, but are they really active. Some people are turned back at Government hospitals for lack of adequate money for major surgeries despite Government insurance for all.

Note that even one of the most important economic statistics of any nation- the Unemployment rate, is not taken in Ghana! The Government intentionally leaves that study out but would report things like inflation rate. It is commonly known that more than 50-70% of University and SHS graduates cannot find jobs!

The media does not even have a way of reporting unemployment figures. Leadership doesn’t seem to care!

3. Has anybody driven to places like Agbogba and new developing Accra suburb town-hoods of beautiful homes beyond Pantang and along the Dodowa road? Watch and see how many years it takes for Government to bring roads to those neighborhoods!

4. Have you noticed how a road can break down and develop dangerous potholes and nobody cares for years?

B. CULTURE and MINDSET:
Let me help with some socio- Psychological reasons that might help us find solutions.

Examine these: you live in a society where
1. Women are encouraged to have children without bothering about fathers and their responsibilities because an uncle would take care of the children. Until recently women were also not even allowed to get Western education and take on regular jobs.

2. Men can just get a woman pregnant and walk away from their responsibilities because the child’s uncles would take care of the children. That is a dangerous mindset to have for nation-building.

3. Society does not pursue irresponsible men with the vigor of the law.

4. Almost everybody has an uncle or elder brother or aunt in the city where they can sleep in their living room. Beautiful culture, but does it have a side effect of laziness?

5. Stealing from an uncle is not considered a crime. Why? An uncle is supposed to die and bequeath you his belongings you have never worked for or contributed to or helped to build. Does this mindset leads to creativity?

6. Religiously we have all been brainwashed to relax and give difficulty challenges and situations to some invisible deity or God to solve. In fact, parents might caution an aggressive young man as being too ambitious.

7. Similarly, innovation and change are resisted. Those returning home after overseas experience and pointing out areas needing improvement in Ghana are soon labeled “too known” or told that “ɛha deɛ saa”, meaning “that is the way we do things here”.

Psychologically the above culture and acceptance of mediocrity by religious rationale tend to make humans relax and reduce stress and desperation. It curtails the need to take a risk to confront life and authorities! Creative problem solving for survival is also reduced and seems like apathy!

Sure, things are changing. However, most of the homeless people in Accra you find seem from outside Ghana or out of our most popular ethnic groups. Ghanaians always seem to have so somebody to fall back on and hence no urgency to stand up and fight for survival and their self-dignity.

I write these with a lot of experience and long term analytical comparisons of observations in the last half-century.

The LONG TERM DANGER:
Without caution and full understanding of the massive Chinese loans, it is very easy for Ghana to be taken over by a foreign government or nationals like China if the youth develop apathy and don’t stand up to demand change and to stop the leadership from piling up massive loans on the nation cannot pay.

Honestly were it not for the Western nations like the USA at the UN, China would simply shiploads of their citizens and arm them and one day they’ll simply take over nations like Tanzania, Zambia, Mozambique, Ghana, Sierra Leone and the ones whose language they have now studied.

Not to scare, but just to educate and warn. The youth of Ghana have no choice but to stand up and reclaim their nation! They should never allow apathy to hold them back or a dying culture or religion makes them think somebody or some deity in Heaven is going to save Ghana for them. No!

Our leadership may be wicked and even greedy and selfish and have no empathy; but you as a citizen has to shed your apathy and take the baton! The ball is in your own court and please know that you can never find lasting peace elsewhere outside Ghana even if you can emigrate and find jobs elsewhere. Trust me you will still want to come back to Ghana! It is best to stand up now and reclaim yourself as a citizen with no fear!

Article
Powered By Modern Ghana
FREE SHS: Akufo-Addo’s Populist Slant Versus Mahama’s Transformational Approach
Beyond 2020 — What Mahama’s Reviewed Free SHS Will Be Like
South Africans aren't being protected from fake sanitisers: what needs to be done
How COVID-19 changed community engagement in South Africa's low income areas
What South Africans must do to avoid a resurgence of COVID-19 infections
Why #ENDSARS protests are different, and what lessons they hold for Nigeria
King Kwasi Kyei-Darkwah Writes about IMANI
‘I Started 'Progressively Free SHS', I'll Make Current System Better’ – Mahama
Glory In A Mess Sanitation: Who To Call?
COVID-19 Updates Live Dashboard
TOP STORIES