Clear The Yellow, Bind The BIND And Save A Baby 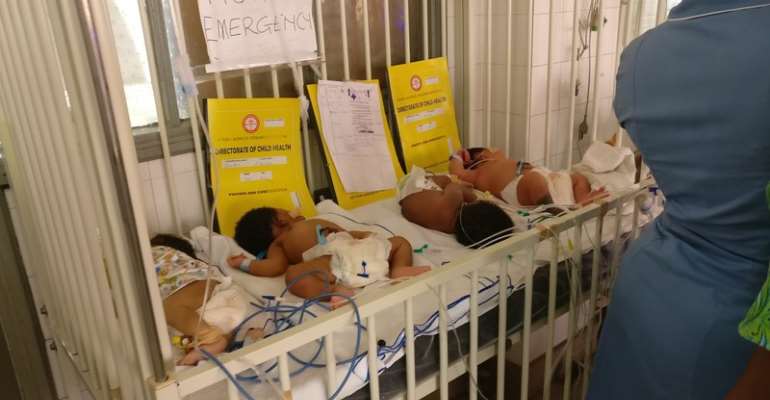 I stood at the triage area of the Mother Baby Unit (MBU) ready and alert for the day. I checked the clock on the wall and it was 7 past 9am. Sounds of crying babies filled the air – as they engaged in a fierce competition to see who can cry loudest. The babies at the triage seemed to be winning though, with the volume and pitch of their cries reaching a crescendo whenever the needle of the cannula pierced their delicate skins, as the doctors tried frantically to locate a vein and set a line.

I took a glance at the Stable unit and noticed that the doctors had already started ward rounds. I hurriedly joined them - to enrich my practical experience as a medical student and as a bonus, get my logbook signed. The sleep-deprived House Officers presented the various cases to the supervising Specialist and management plans were made. Anxious mothers looked up to us (the team) for good news, like – ‘your baby is better today’, ‘everything is okay now’ and ‘you’ve been discharged’. I could bear with them as the painful experience of childbirth deserved some chill time at home with family and friends. But unfortunately, not all newborns are stable enough to be discharged on the day of birth. Some would have to admitted, monitored and treated till they are well enough to go home.

As we moved to the next cot, the supervising doctor exclaimed excitedly; “King Yellow!” The entire team burst into laughter. I peered into the cot and saw a lovely little baby whose arms and legs kept punching and kicking in the air. He was under a blue light with a cot sheet spread over to keep the light in. That was phototherapy – treatment given to babies with mild jaundice. He grimaced slightly as the doctor reached out to touch him. The blue light was turned off momentarily and I saw the yellow tinge in his skin clearly. The doctor rubbed his gum and feet and commented that the jaundice was a lot better compared to some days before. Everyone was happy because he was responding to therapy and there was very little to no fear of him developing a permanent neurological problem. Apparently, he was named ‘King Yellow’ because his jaundice was so severe- he was yellow from head to toe before admission. But with timely intervention and treatment, he was almost back to normal.

The day went slowly and at 5pm we finished our last tutorial for the day. I headed back to the hostel with some classmates. Three of us decided to return to MBU for night duty at 7pm (we were required to do two night shifts for each rotation). I made my way back to the MBU with a full belly and my head spinning with a tinge of headache in the background. I guess that was my body telling me I needed some sleep. The waiting area of the MBU was quiet with just two people there. They were seated calmly and engaging in some sort of casual conversation. As I washed my hands at the entrance to the triage and main wards, something felt off about the general atmosphere. I made my way towards the triage…

There, I found a young woman in a straight dress with an African cloth strapped just above her bosom. Her hair was partially covered with a scarf, with loose strands sticking out from the sides. She was in slippers, with her feet covered in dust. She had folded her left arm and her right palm on was her lips. She sobbed profusely and I could see her eyes - fiery red. I was informed that they just arrived as a referral from a hospital they reported to few hours before. Her appearance was suggestive of a desperate woman and it didn’t take long for me to notice why.

At the triage, I saw her baby lying down, being attended to by two doctors. Both were trying to locate a vein for intravenous access. The baby was completely yellow and its movement was so lax and uncoordinated. There were occasional jerks of the legs, followed by variable periods of inactivity. I drew closer and saw his eyes - they were outright yellow! His eyelids fluttered for a moment and then stayed put, with the eyes dazed. I asked the doctors if they needed my help and yes they did. They asked me to hold a light source for them to have a better view. Concurrently I heard one specialist shout to another staff to get the equipment for exchange transfusion ready. Though many attempts were being made to save the poor baby, we knew deep down that the situation didn’t look good.

Behind us, I heard the father of the baby lament helplessly that they had already lost a child to neonatal jaundice and it seemed like he was reliving the experience all over again. I was stabbed at heart and tried to hold back the tears which welled up in my eyes. In the meantime, the doctor found a vein and started taking blood samples for laboratory investigations. The expression on his face looked neither good nor comforting as he conceded; “Charley, the child is in BIND oo”.

Neonates are babies from day 0 to day 28 of life. When their eyes or skin turn yellow, it is known as Neonatal Jaundice. It is caused by excess bilirubin in the blood (bilirubin is a yellow pigment produced when red blood cells break down). It is quite common in newborns and usually harmless; but can lead to serious consequences like BIND (Bilirubin Induced Neurological Deficit). BIND is the most feared complication of Neonatal Jaundice. Unfortunately, BIND is permanent and irreversible. It puts newborns at risk of developing complications which they would have to live with for the rest of their lives. The child might never gain neck control, crawl, walk, talk, or suffer a severe intellectual disability.

There is good news though! BIND can be avoided by early identification and treatment of Neonatal Jaundice. So dear parents and caregivers, when your newborn's eyes or skin begin turning yellow (especially in the first seven days of life), seek medical attention immediately.

Remember that when the yellow (Neonatal Jaundice) is cleared, BIND would be bound, and a baby will be saved.