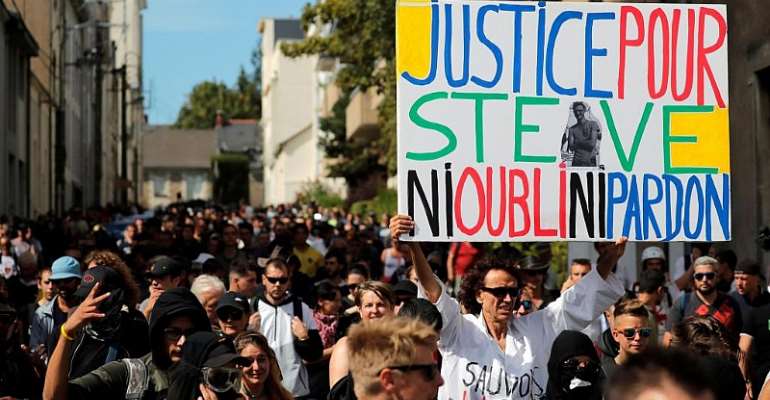 Hundreds of Yellow Vest protesters took to the streets of Nantes on Saturday to demonstrate against police brutality, a day after the city's commissioner was demoted for the heavy handed tactics of officers that led to the death of the young partygoer, Steve Maia Caniço, in June.

Demonstrators in the western city of Nantes held banners with a plethora of different slogans, from solidarity with protesters in Hong Kong to demands for an independent inquiry into the death of Steve Maia Caniço.

The 24-year-old went missing on the night of 21 June after officers moved in to disperse techno music fans at a free riverside concert.

A minority of protesters in Nantes were wearing the signature high visibility yellow vests, with most clad in black with gas masks at hand for the 44th Saturday demonstration since November 2018

Various riot police units were out in force, and several armoured vehicles patroled the centre of the city.

Small groups of protesters broke into shops and smashed the window of a bank, prompting police to use tear gas and water canon to contain protests within a restricted area.

Three police officers and three gendarmes were injured. Thirty-five protesters were arrested according to a police spokesperson.

Other cities
Protesters stormed the main Matabiau train station in Toulouse on Saturday disrupting services for around an hour.

Several different demonstrations took place around Paris. Close to a hundred Yellow Vests entered a terminal building to protest against the proposed privatisation of Orly Airport. Flights were not disrupted.

Around 100 Yellow Vests gathered outside a police station in the southern city of Nice demanding an end to police brutality.

In March a 73 year-old woman said she was pushed and injured by riot police in Nice. An inquiry by the district prosecutor cleared the police of wrongdoing, angering Yellow Vest protesters in the city.

Protests are planned for next Saturday across France.