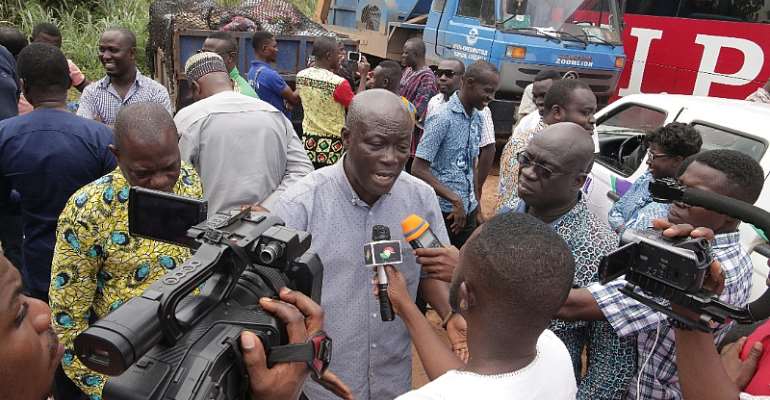 There is a sanitation disaster waiting to explode within the Sekondi -Takoradi Metropolis of the Western Region as the Assembly lacks capacity to manage the overly full landfill site in the city whiles various contractors abandon site due to non-payment.

The health threatening state of the Sofokrom Landfill site which is the only one within the metropolis was uncovered during a joint parliamentary select committee tour of the region to inspect the various sanitary states of landfill sites following a recent fire outbreak at the Kpone landfill in Accra.

The Sofokrom landfill site sparked anger among the parliamentarians who had difficult time to access the site as the gory site of faecal matter being disposed openly into bushes and the offensive stench coupled with a devastated access road to the landfill site forced the Members of Parliament to declare the area as a “disaster zone” which needs to be addressed with immediate effect.

A source at the waste management department of the Sekondi-Takoradi Metropolitan Assembly revealed that the Assembly lacks capacity to manage the landfill site hence the need to re-engage waste landfills company limited to help provide proper engineered landfill management.

The Member of Parliament for Banda and the 1st Deputy Minority Chief Whip, Hon. Ahmed Ibrahim in an interview with journalists condemned the sanitation condition of the landfill site describing it as a “sanitation disaster waiting to explode”.

He said modern practices in waste management focuses on waste recycling which is sustainable and should be the focus of every assembly to ensure waste is recovered and recycled into other useable materials.

“The joint select committee on this tour will recommend the establishment of waste recycling and compost plants across all the regions to help create jobs and resources out of the waste been generated”, he revealed.

Meanwhile, the Deputy Regional Minister of the Western Region, Gifty Eugenia Kusi said waste recycling and composting as demonstrated by Zoomlion’s Integrated Recycling and Compost Plant (IRECOP) in Accra should be established in the region to help create value and jobs out of the waste in the region.

She charged the parliamentarians to advocate for an increase in the budget allocated to the region to help tackle sanitation.