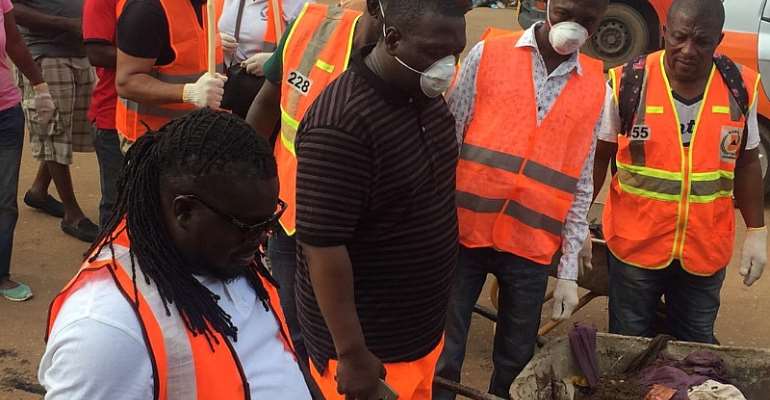 According to the NADMO Regional Director, Hon. Archibold Cobbina, 'AAFA MUDZI - WONGBE MUDZI is simply to Clean up Communities and Homes in a bid to Up root the cancer of indiscriminate disposal of Waste and the dumping of waste into drains".

He added that, it's nothing new from their last exercise, ' Operation Prevent Disaster', exept that they are doing their best to include more celebrities ( Musicians, Artists, Film Actors etc ) in other to encourage the youth to participate in Clean up exercises, as well as educative Programs on Improving Sanitation.

Hon. Archibold Cobbina called on cooperate organisations, individuals and the media to support the call to uproot the cancer of filth in our society. He admonished that if Ghanaians don't keep Ghana Clean, Nobody will.

The Clean Up was supported by Zoomlion, Asadu Waste, Ghana National Fire Service, Omar Sherrif Captan ( Film Actor), President Obuor ( Musician), Stoneboy of BIHM Nation and Patapaa could not Participte due to engagement outside of Accra.