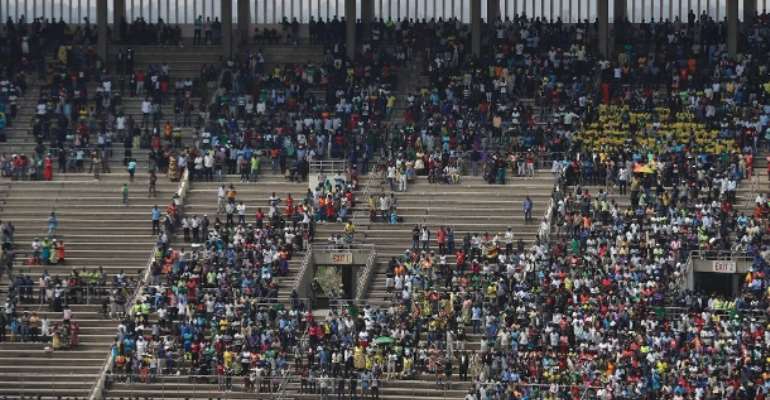 Empty ranks at the funeral service: Zimbabwe's former ruler Mugabe was commemorated during a state ceremony.

The funeral service for the former ruler of Zimbabwe is much less than intended by his successors. Not many people can be seen next to the state-organized mourners.

The funeral service for Zimbabwe's former ruler Robert Mugabe was attended by significantly fewer inhabitants of the East African country than expected. The ceremony with a military parade and songs for the former head of state, who died at the age of 95, was held in the capital Harare in a stadium that holds 60,000 visitors. According to eyewitnesses, at least two-thirds of the stadium's ranks remained empty.

Burial follows at the "Hero Cemetery"

Mugabe had died on 6 September at the age of 95 during a hospital stay in Singapore and was subsequently transferred to his home country with great pomp. On the instructions of the government, he was to be buried in the so-called hero cemetery in Harare. The family had actually wanted to bury him in his home village. Now a mausoleum is expected to be built for him.

Salute shots for the ex-dictator: A memorial service for Robert Mugabe was held in Zimbabwe.

Among the participants were about a dozen current and former leaders of African countries, including the Presidents of Kenya and South Africa, Uhuru Kenyatta and Cyril Ramaphosa. Most of those present arrived from the surrounding area in buses organized by the ruling Zanu-PF party. Many of them wore T-shirts with the portrait of the current head of government Emmerson Mnangagwa. The former pupil followed Mugabe in office when the military forced him to resign in 2017.

The former freedom fighter Mugabe had led the former Rhodesia into independence from the colonial power Great Britain in 1980. At first he was head of government, in 1987 he became president. Mugabe was initially regarded as a role model in Africa's quest for self-assertion, but later he drove South Africa's former granary to ruin and was himself denounced for waste. Until his fall in 2017, he ruled Zimbabwe with a hard hand.