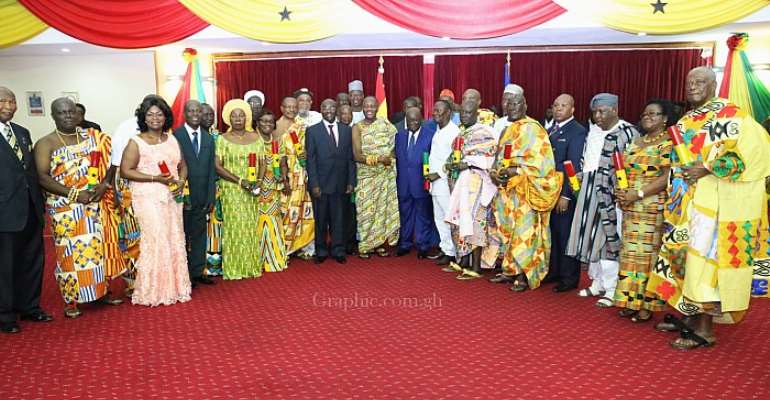 Were the Dear Reader to ask me, I would promptly retort that membership on the largely toothless advisory boondoggle that is the Ghana National Council-of-State, Council-of-State for short, does not mean much in terms of the substance of the country's general political architecture. I even have a highly respected legitimately invested traditional ruler relative as President of that almost august institution, but that is the rare exception these days. I learned of our relationship from a sibling and one or two of my Kyebi relatives recently, by the way. It gives me quite a bit of a proud sense of my heritage, in as much as I wish I had known of such consanguineous bond much earlier on. The institution of the Council-of-State has not meant much to me in the past because this otherwise august governance ancillary had been scandalously packed chockfull with such unconscionable “revolutionary evangelists” and Trokosi Nationalist Warmongers as the late Prof. Kofi Nyidevu Awoonor (aka George Awoonor-Williams), who was even allowed to preside over this otherwise venerable establishment by the late President John Evans Atta-Mills.

I readily confess that I have not studiously followed the activities of this largely ceremonial establishment to be able to more authoritatively share my opinion vis-à-vis who more than qualified to sit on the Council-of-State and/or who was a patent disgrace to the same, except to remark rather painfully that under former President John Dramani Mahama, the Council-of-State was recklessly and dishonorably used to rubberstamp Mr. Mahama's grossly ill-conceived and inexcusably misguided decision to ride roughshod over the erstwhile Wood Supreme Court, in the scandalous matter of the Montie Trio would be assassins and rapists of then Chief Justice Georgina Theodora Wood and several of her associates on the highest court of the land.

In the case of Dr. Nii Kotei Dzani, an elected representative from the Greater-Accra Region on the Council-of-State, the closing down of some two banks that he reportedly owned, namely, Ideal Finance Limited and First Trust Savings and Loans Limited, ought not to become the headache of the entire membership of the Council (See “Council of State 'Disowns' Ideal Finance Boss” MyNewsGh.com / Ghanaweb.com 8/27/19). First of all, what is most significant here to point out, now that we all have to deal with it, is for the Council to have bylaws dealing with cases like that of Dr. Kotei Dzani, if it already does not have any in place. I doubt it. Of course, we need to also quickly point out that having one of one's businesses shuttered by the nation's central treasury, the Bank of Ghana, for fiscal insolvency does not necessarily mean the unearthing of any deliberate act/s of criminality on the part of the proprietor of the aforementioned financial establishments. Matters, as have almost always been the case, may be far more complicated and multipronged than are being let on to us by the media which, more often than not, may only be privy to only one-half of the full story.

At any rate, what I meant to suggest here is that there ought to exist rules for either suspending or expelling errant Council-of-State members like Dr. Kotei Dzani who may be found to have flagrantly breached public trust and the integrity upon which they were either elected or appointed to sit on the Council. It is also quite obvious that some passionately partisan media operatives may have wrong-headedly and, perhaps, even maliciously presumed to rope the President of our august Republic into a matter over which he had absolutely no part or hand, as clearly seems to be the case of Dr. Kotei Dzani. Which may be why the bitter complaint went out regarding the abject lack of sophistication on the part of some media operatives and the imperative need for those guilty of such professional indiscretion to learn the positive art of finetuning or nuancing their reportage on issues like the Kotei Dzani Affair, as it were.

I was also going to say that the case involving the Greater-Accra Region's Representative on the Council-of-State is neither unique nor anything new. To be certain, the Kotei Dzani case could not be worse than that of the current President of the United States of America, namely, Mr. Donald John Trump, who is known to have had his real estate and casino businesses go into bankruptcy at least six times over the course of some four, or so, decades and could still succeed to the Presidency of the most powerful empire in the postindustrial world of the twenty-first century. I am also more inclined to believe that the problem has far more to do with the gross incompetence of the previous Mahama-led regime of the National Democratic Congress (NDC), especially in the area of its fiscal oversight duties.

Ultimately, whatever the real details of the Kotei Dzani case may be, it is absolutely erroneous for any media organization or operative to accuse the rest of the membership of the Council-of-State of having “disowned” one of its own, merely because one of the financial enterprises of the member concerned has failed. The fact of the matter is that legions of businesses fail all the time, especially on the financial market. And what is more, most of these businesses involve losses well over and above the financial losses allegedly suffered by the Kotei Dzani-owned Ideal Finance Limited and/or First Trust Savings and Loans Limited.