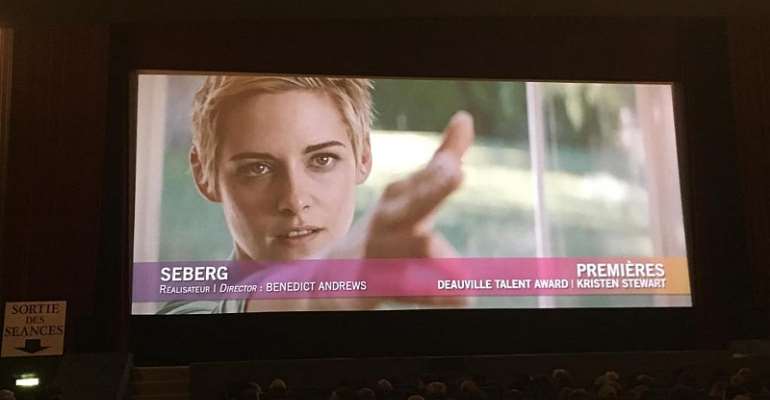 Deauville's American Film Festival has paid tribute to Kirsten Stewart, the 33-year-old US actress with some 20 acting-career years already behind her. The "Twilight" series gave Stewart and co-star Robert Pattinson the exposure they needed to break through. Neither have looked back.

French director Olivier Assayas with whom Kristen Stewart has worked more than once, handed the actress her award saying "I have often said and will repeat it, how much I owe her, how much the films we have made together owe her."

Stewart notably appeared in Assayas' Clouds of Sils Maria (2014) and Personal Shopper (2016)both of which were selected for the Cannes Film Festival.

Stewart as Seberg
Her latest film, a biopic called Seberg, is about the late US actress Jean Seberg. Stewart plays the film star who became famous in France in the 1960s because of her role as the American ingénue in Jean-Luc Godard's A Bout du Souffle, a milestone New Wave movie.

Australian Benedict Andrews' second feature film focuses on a specific period in Seberg's short 40-year life. From 1968 to 1971, the actress with means and political revolutionary drive returned to the US. She funded the Black Power, black emancipation, movement, had an affair with one of its leaders Hakim Jamal (Anthony Mackie) which led to her being hounded by the FBI while her estranged husband, French novelist Romain Gary, (Yvan Attal) supported her, both in the States and when she returned as an exile to France.

“The film is based on facts and on FBI documents,” Andrews said in Deauville. “Jean was by no means the biggest victim of harassment and persecution at the time at the hands of the FBI."

It doesn't matter that it's not the Jean Seberg of the 1960s and 70s on the screen, Stewart vehicles the story of a broken down woman with convictions about freedom and equality at a time when European and US societies were undergoing revolutions, and the authorities faced powerful challenges and in some quarters resistance to that deep change was strong and brutal.

Kristen Stewart is on a roll. Two French premières screened at Deauville this week.

One of them is JT LeRoy, already released in the US and the UK, where she plays Savannah Knoop who embodies Jeremiah Terminator LeRoy, which is an author's pseudonym.

The author is her sister-in-law who has created the persona of a writer whose tragic bestseller about a boy's love for his prostitute mother is supposed to be autobiographical.

Justin Kelly directs the film based on Knoop's book about how they - now self-declared gender-neutral - were manipulated by their brother's wife. Laura Albert is played brilliantly by Laura Dern as she cajoles and incites and theatens 25-year-old Knoop to impersonate an imaginary character.

It's long and convoluted, takes place in the late 1990s to early 2000s, but the film is intriguing as it reveals the personal side to one of those attention-grabbing hoaxes which actually involved Asia Argento.

Both these films raise questions about truth and reality, what we believe and what we can believe. They are timely in days of “fake news”.

Broad talent
As well as Stewart, Deauville's Talent Awards this year went to four others. Former James Bond hero Pierce Brosnan, Geena Davis, who is today executive producer of the documentary This Changes Everything, on gender inequality in cinema. Johnny Depp, star of the forthcoming Ciro Guerra colonial piece, Waiting for the Barbarians, a Deauville première and actress Sienna Miller.

Newer talent
The Deauville American Film Festival also plays the role of talent spotter with an award for one of Hollywood's rising star. This year it went to Sophie Turner of Games of Thrones fame. Fans of the popular TV series were treated to a marathon daily showing from the start of the festival on 7 September: one season of season 1 to 8 per day, two episodes per session.