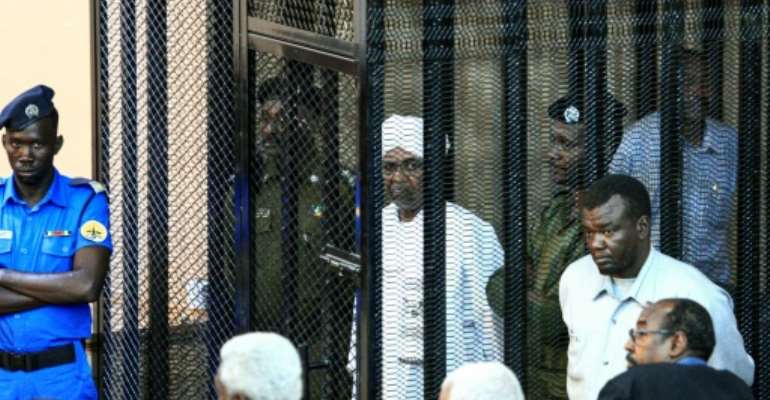 Sudan's Omar al-Bashir was deposed by the army in April following months of protests against his iron-fisted rule. By Ebrahim HAMID (AFP)

A witness in the trial of Omar al-Bashir said Saturday that his army-owned firm had supplied military equipment to neighbouring countries using funds allegedly received illegally by the ousted Sudanese leader.

Bashir was deposed by the army in April following months of protests against his iron-fisted rule of three decades.

In August, he was charged with the illegal acquisition and use of foreign funds -- offences that could land him behind bars for more than a decade.

But Bashir said the seized funds were the remainder of the equivalent of $25 million received from Saudi Arabia's de facto leader Crown Prince Mohammed bin Salman.

The funds, he said, were part of Sudan's strategic relations with Saudi Arabia and were "not used for private interests but as donations".

On Saturday, a witness appeared to back Bashir's claims, telling the court his army-owned firm had received funds from the presidency.

"We received $1.2 million. We sent military equipment purchased with these funds to neighbouring countries," defence witness Sadiq Yakub, who represents a manufacturing unit owned by the Sudanese army, said at the fifth session of Bashir's trial.

Bashir, sitting inside a black metal cage, heard the witness as his family members waved at him from the court room.

Yakub did not specify which countries received the equipment, or whether the supplies included weapons.

Since Bashir came to power in an Islamist-backed coup in 1989, Sudan has been accused of supporting regional insurgencies in Eritrea, Ethiopia, Egypt and of having ties with countries like North Korea and Libya.

South Sudan's President Salva Kiir had even accused Khartoum of backing his opponent Riek Machar in their deadly civil war that erupted soon after the south split from the north in 2011.

Since 1993, Washington has included Sudan in its "state sponsors of terrorism list", although in October 2017 it ended its decades-long trade sanctions.

After his overthrow, Bashir was transferred to the capital's maximum-security Kober prison, where thousands of political prisoners were held while he was in power.

Sudan has since embarked on a transition to civilian rule following a power-sharing deal signed on August 17 by protest leaders and the generals who ousted Bashir after months of unrest.

A civilian-military ruling body is now tasked with steering the country through a three-year transition period.