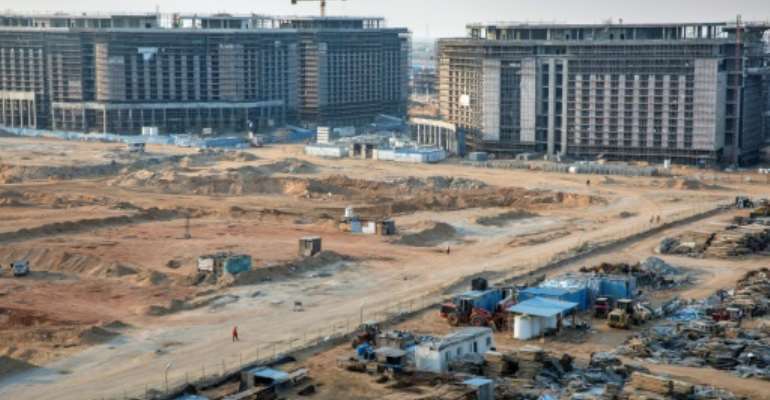 Construction of ministerial buildings at the governmental district in the new administrative capital, some 50 kilometres east of the capital Cairo. By PEDRO COSTA GOMES (AFP)

Egypt's President Abdel Fattah al-Sisi on Saturday flatly denied allegations of corruption made by an Egyptian businessman, assuring he was "honest and faithful" to his people and army.

Videos posted online from outside the country since early September accusing Sisi and Egypt's military of graft have gone viral, sparking rare debate about the army's growing economic empire.

The man behind them, 45-year-old construction contractor Mohamed Aly, claims that authorities have misappropriated millions of Egyptian pounds in public funds.

He also alleges the military owes him hundreds of millions of pounds for projects his company was commissioned to build, including palatial residences for Sisi.

Sisi told a youth conference in Cairo on Saturday the accusations were "lies and slander" designed to "break the will (of Egyptians) and make them lose all hope and confidence".

Quoted by local TV, Sisi said he decided to speak out despite "calls from all state bodies" for him not to respond.

"Your son is honest, faithful and loyal," he added.

Aly -- who says he has fled to Spain -- has not provided evidence to back up his claims and the Egyptian armed forces declined an AFP request to comment.

In the footage, released in instalments, Aly mocks Sisi -- a former army chief -- and lambasts the military.

In the first video, posted on September 2, Aly blasted Sisi, without naming him, saying: "You say the Egyptian people are very poor and that we should tighten our belts.

"(But) you are throwing away billions and your men are wasting millions."

In a speech on Egypt's economy two years ago, Sisi had said "We (Egyptians) are very poor".

The reality is different, according to Aly, who says that some of the projects the military asked him to build included a luxurious guest house for Sisi in the Mediterranean city of Alexandria and a palace in Cairo.

"People must know how their money is being spent," Aly says in one video.

For decades, the military has played a key but opaque economic role, producing everything from washing machines to pasta, alongside building roads and operating gas stations.

Since the arrival of Sisi, who toppled his Islamist predecessor Mohamed Morsi in 2013, the army's economic involvement has been more visible amid austerity measures and rising prices.

The army spokesman said recently on a popular TV show that the armed forces oversee rather than "manage" some 2,300 projects nationwide, employing five million civilians.