Ironing out the kinks in Tunisia's new democracy 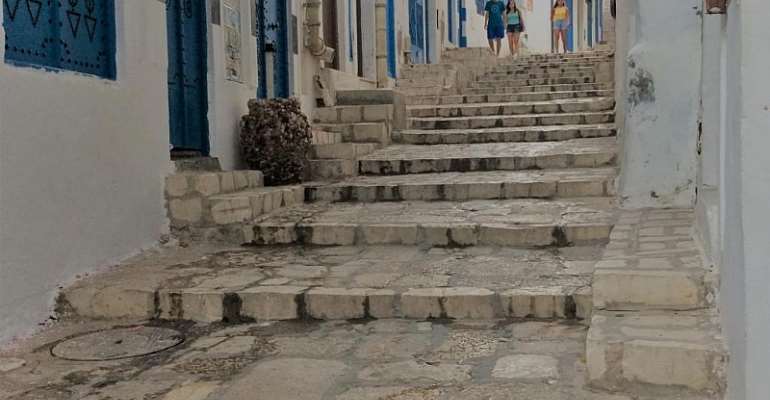 While the majority of people across the Middle East, North Africa region sing the praises of the Arab Spring revolution for bringing down dictatorships and ushering in democracy, there are some who think the movement has gone too far in a too short a time, particularly in Tunisia.

“For me, it's very bad,” says Samy, an Algerian restaurant owner at the entrance to the Sousse medina. A tourist hotspot; or what used to be a tourist hotspot.

“They think that democracy is to do what you want, not to respect the law…they think you can do anything you want… It's crazy!”

A terrace with sea views would seem to be the perfect combination to attract busloads of tourists to his restaurant on a Friday night.

At one point it did.
Before the revolution of 2011 that brought down longtime dictator Zine El Abidine Ben Ali, life was good according to Samy.

“By midday, the restaurant is very full and in the evening every time it's full. But not now. It's impossible to come and find me full. I survive with my family, I just pay the bills, pay the taxes, that's all”.

Life pre-revolution
Samy came to Tunisia 25 years ago.
At the time, Algeria, his home country, was in the midst of a civil war against Islamists.

Tunisia was a beacon of stability and seemed to be a little slice of Europe by comparison to other North African countries.

“When we come to Tunisia, we find security. You can go sleep on the beach, no problem. You can go with your family, never a problem,” reminisces Samy.

Under Ben Ali, Tunisia was a police state. Security was imperative and the population generally felt secure.

“You could go walking out at 2am and no problem. Police would be everywhere,” explains Nozha Sekik, a retired ethnographer and owner of a bed and breakfast in Tunis.

Perhaps order and security were in place, but corruption was also rampant. This led to acts of desperation, such as that of 26-year-old fruit seller Mohamed Bouazizi, who in December 2010 set himself on fire after once again being the target of harassment by local police.

It was the catalyst for the Arab Spring.
Islamist vote
With democracy comes the privilege to vote in elections and have a say in who governs the country. The problem with most new democracies is that it is often a chance for certain parties to spring into power democratically and then change the system, as was the case in Egypt in 2012 when the Muslim Brotherhood come to power.

But the Muslim Brotherhood was well organised, and it had huge financial means.In the case of Tunisia, the Islamist party, Ennahda, is also an established grassroots party.

While there has been very little movement on the ground in the final days of the electoral campaign, save a few last-minute efforts by candidates to host parties to attract attention, Ennahda has been organising campaigners, handing out flyers, playing music and encouraging its base to vote.

That reality has worried people in a country long known for its secular ways.

“If my family don't vote and all my friends don't vote, that's many, many votes gone. And all the people of Ennahda vote and automatically it's a victory for Ennahda,” stresses Samy.

That scenario, however, is a looming possibility adds Nozha. Ennahda have the financial means to encourage voters.

“Last time, in 2014, they were handing out biscuits to everyone!” she chuckles, wondering if some gimmick was used this time.

Necessity of voting
With 26 candidates in the running, many Tunisians have already stated they're not sure who to vote for, though the act of voting remains an important symbol for the people.

“If they don't vote, they miss their voice. They must vote, they must choose someone,” says Samy who can't vote himself because he's not a Tunisian national.

He adds that politics, both in the region and around the world “is very difficult”.

It takes time.
But Tunisians are frustrated with waiting for things to get better since the revolution.

Terrorist attacks, a dwindling economy, high unemployment have paralysed the country, disappointing those who had hoped their efforts eight years ago would prove fruitful.

Samy hopes that, whoever wins, it's not someone determined to steer the country towards a scenario he's already lived through.

Perhaps less choice is better, which is why he thinks going from 0 to 100 in just a few years was never the prudent thing to do. Not for a country like Tunisia that is still testing the waters of democracy.