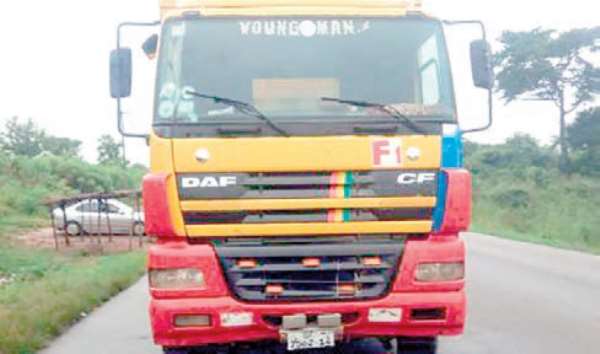 A Dad truck with registration number GE 7562-14 reportedly ran over a police officer with the Motor Transport and Traffic Department (MTTD) killing him in the process at Kintampo in the Bono East Region.

The officer has been identified as Inspector Foster Ampomah. The unfortunate incident occurred at a checkpoint at Nante Zongo along the Kintampo-Jema highway.

According to reports, the policeman who was on duty in the early hours of Friday had signaled the driver of the truck, Awudu Sumaila, 30, to stop but the signal was ignored leading to the unfortunate incident.

The truck was heading towards Kumasi in the Ashanti Region from Bolgatanga in the Upper East Region.

The Kintampo Divisional Police Commander, Assistant Superintendent of Police (ACP) Joseph Gyau Antwi, who confirmed the incident to the media, said the officer was rushed to the hospital where he was pronounced dead on arrival.

The sad incident has increased the number of traffic officers who have been killed in the line of duty to three within two weeks.

Inspector Amponsah's death follows the killing of Sergeant Michael Dzeamesi and Lance Corporal Mohammed Awal at Gomoa Buduburam, near Kasoa in the Central Region. The two were shot dead by occupants of a vehicle they accosted after they (occupants of the vehicle) refused to pay heed to their signal to stop.

Meanwhile the driver, Awudu Sumaila, and the mate of the truck have been arrested by the police to assist in investigation while the body of the policeman has been deposited at the Kintampo Hospital morgue pending further investigations.