Our Hero Deserves The Best 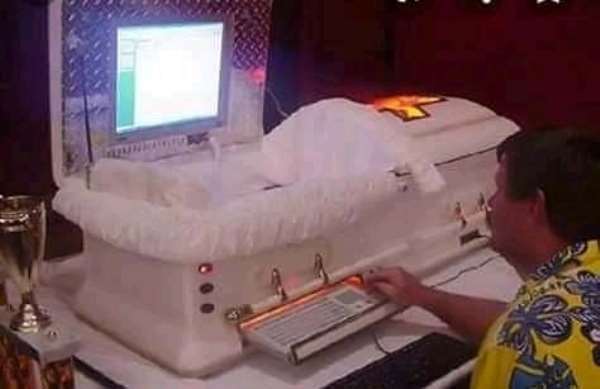 If it's earthly wealth that makes one to be described as successful, then Mugabe deserves more than he's alleged to have now.

*He's a Saint*.
Even, if those who amassed wealth on innocent souls' blood in Africa, are given befitting burials, and beautiful tributes, don't Mugabe deserves more than his detractors say he's having?

On various social media platforms, it's circulated to ridicule our Saint Mugabe as profligate and opulent, even in his death.

They say: "not only did Mugabe amassed wealth on the account of the country's resources, he's to be buried in a bespoke casket that aids his remains to chat with the living" (sic).

Such casket, the coffin, is fitted with computers, and is said to have been made in Singapore, where he died.

That account is different from the wooden coffin we see circulating on patriotic Africans' social media platforms.

Our African brethren are circulating same. They join our foes to belittle the intelligence of our wise ones, either deliberately, or ignorantly.

Our African brethren, because we love no more to learn about our heroes and only believe in what the Whiteman says, we now go with them to make fun of Robert Mugabe.

Look, ask the western media, why they don't criticise Queen Elizabeth II for reigning for six decades and over, but, only write about Mugabe that he stayed in office for long - just four decades?

Obviously, just to achieve one aim; erasing his legacy.

But, they've failed badly.
We those who are the true sons of Africa know who our Mugabe was.

He stood for the interest of the African child, the vulnerable.

He gave back neocolonialists' stolen lands to the poor African, and he was hated for that.

Mugabe's regime took it upon herself that every Zimbabwean get education. Today, they're the most lettered in Africa.

Is it any wonder irrespective of the smear campaigns and the media propaganda, Zimbabweans are fighting for his corpse and where it should be buried?

Such is the mark of a Saint.
Readers of the Christian Bible can relate, that: same happened to the remains of the patriarch Abraham.

The Western Media, doing what they've been told by their masters, who have sworn heaven and earth to polarise and Balkanise us, will not tell the world that: the hyperinflation Zimbabwe suffered under our Saint was as a result of unreasonable economic sanctions the western governments and their imperialist institutions saddled his administration with.

As our customs frowns on, we well-cultured Africans don't speak evil about our dead ones, even if they killed as the colonial masters did to our enslaved ancestors.

That notwithstanding, what we say and write about Mugabe is what he deserves - nothing, but the truth.

If the imperialists, the neocolonialists will not join us to celebrate our fallen hero, they should leave the great man we adore to rest in perfect peace.

We can't let it rest there than to sign off as thus: "Mugabe deserves what you enjoy also, after all, you were not better educated than him!!!!".