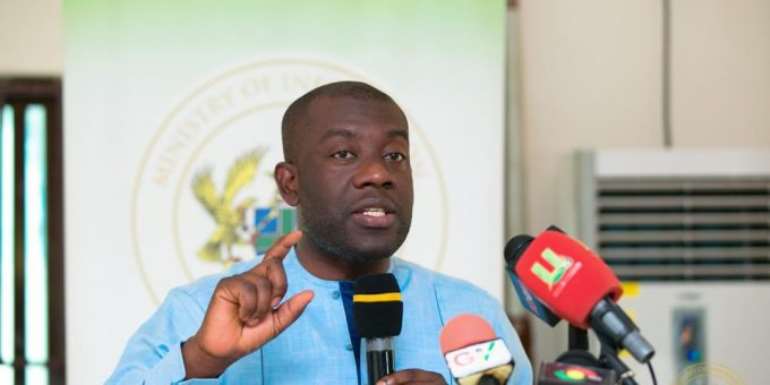 As part of means to reducing the unemployment canker in the country, Minster of Information, Kojo Oppong Nkrumah has disclosed that some Ghanaian youth will be employed as Information Officers for the implementation of the Right to Information (RTI) Act in January next year.

According to him, these Officers when employed will be trained on how to deliver information to the general public under the RTI as well as the Data Protection Law.

Addressing the media in Accra, the Information Minister said “Once the 600 information units are set up, information officers would be allotted to manage it for the implementation of the Right to Information Act in January next year. They will ensure that information needed by the general public is disseminated.”

The Right to Information (RTI) Bill was passed on 26 March 2019 by the Parliament of Ghana although awaiting the President's signature. Prior to its passage, various stakeholders believed the delay in passing the bill into law was to allow exemptions of certain vital information bordering around government policies which is they intend to conceal from the public (Akoto, 2012). source This bill is to enable citizens to hold government accountable to ensure that there is a high level of transparency in governance of the country.

At a capacity-building workshop for Chief Directors and Regional Coordinating Directors on the RTI law, the participants were selected from the Ministries, Departments and Agencies (MDAs) across the country and taken through data mapping exercise, basic rudiments of the Data Protection Law and setting up of information units.

“All persons shall have the right to information subject to such qualifications and laws as are necessary for a democratic society. The training would enable the participants to be abreast with the new law and support the government’s implementation drive.” Mr OppongNkrumah said

The Information Minister further added that government will be equipping officers with logistics to enable them work effectively.

Information gathered indicates that the cost of the operation of the RTI law has been forwarded to the Finance Ministry for justification to ensure timely releases of funds are disbursed to appropriate quarters.

Chairperson of the Committee on Constitutional, Legal and Parliamentary Affairs, Ben Abdallah revealed that the RTI law required a Government pro- actively to provide planned information to the public without applying for it.

Mr Abdallah Banda, who also doubles as the the Member of Parliament for Offinso South, said “Information pertaining to any public institutions or entities undertaking public projects were supposed to be given out to the public, except that, that information was classified under the law.”

He revealed that although there will be a stipulation for translation of information into the various dialects as requested by an applicant since no Ghanaian will be sidelined, it will come with a cost

The Dean of Regional Coordinating Directors, Mr Felix Chaahaah revealed that measures have been put in place to fill the information units with computers as well as other facilities.