Single and lesbian, she turns to Spain for fertility treatment denied in France 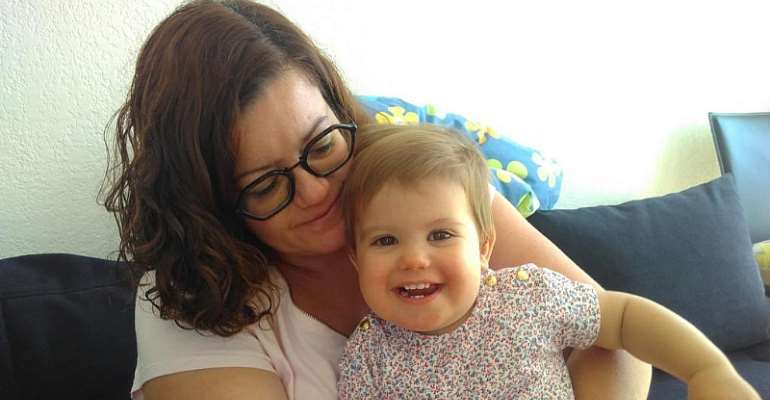 What do you do when you want to get pregnant in France and you don't have a male partner? France currently prohibits single women and lesbian couples from accessing medically-assisted procreation (called PMA in French), including sperm donation. That could be about to change.

French lawmakers are starting to debate a new law that would extend the right to medically-assisted procreation to all women, not just women in heterosexual couples with infertility problems.

But until it changes, women turn to neighbouring countries. One woman describes her experience going to Spain to make a baby.

“I was a little scared to maybe not recognise anything of myself in her,” says Gwendoline Desarménien, talking about her daughter, Adele, who is a chubby 18-month-old, with straight brown hair and brown eyes – and looks a lot like her mother.

She opens her mouth wide for a spoonful of sweet potatoes mixed with egg: lunch on a Saturday afternoon at home in Montpellier, in the south of France.

“She really has my eyes, my mouth,” says Desarménien. “Her hands and feet are not mine. But she really, really looks like me.”

Desarménien recalls the day Adele was born, in May 2018. “When they put her in my arms, it was just magic. I don't think about the donor. I was seeing only her!”

Doing it alone
Even though her daughter cannot talk yet, Desarménien talks to her a lot, and tells her about where she comes from, in terms she can understand.

“I tell my daughter that I was alone and I wanted a baby for a long time, so I went to Spain to a clinic, because I can't have a baby alone,” she explains. “And I tell her that a man gave a seed so her mom can have a baby.”

Desarménien has a son, who is almost 22, who was born when she was 21. She always wanted her son to have siblings, but soon after he was born she left his father because she realised she was lesbian.

Several years ago, she was in a relationship with a woman, and they wanted to have a baby. They were living in Paris and had planned to go to Belgium for artificial insemination, where it is legal for lesbian couples. But the relationship ended.

Desarménien was 39-years-old: “I said to myself, you're 39, it's now or never. Do I really want this second child? What I am I ready to do to have it?”

It turns out, she was ready to do quite a lot.
Since she had moved back to Montpellier, where she grew up, it made sense to go to Spain where artificial insemination is legal for any woman, no questions asked.

French doctors involved
Desarménien had to let her French doctor know what she was doing, because she needed pre-natal tests. She had found someone who supported her plans to get artificial insemination, despite it being illegal in France.

“You have a lot of gynaecologists who don't want to help us because it's against the law,” she says. "We can't be mad at them, but we have to find someone who is going to be OK helping us.”

In February 2017, armed with the results of her tests, she drove three hours from Montpellier to the clinic in Gerona for a consultation.

Fertility clinics in Spain know they have a lot of French clients – Desarménien says the doctors even spoke French.

She had been hoping they would decide to do artificial insemination, which is a relatively simple process of injecting sperm into the uterus through the cervix.

She was told that at her age, 40, she had a very small chance of that working, and that she should do IVF, or in vitro fertilisation, which involves an operation to extract eggs to be fertilised in a lab and re-implanted into the uterus.

Desarménien went home, disappointed that she had to go through the more invasive – and more expensive – procedure. She decided to go forward anyway.

In May, two weeks before her ovulation date, she started injecting hormones, to increase the number of eggs available. She had found a doctor who was willing to prescribe the hormones, illegally, which meant that the 2,500 euro cost was covered by French health insurance.

Going to Spain to have a baby
The date of the operation was set for Monday, 29 May 2017. The re-implantation would be three days later. She drove to Spain with a friend the day before.

“It was Mother's Day,” she says, laughing at the irony. “You're a bit stressed, because you don't know if it's going to work.”

She had been told she only had five available eggs, not enough. Her French doctor warned that the IVF would not work. Of the five that were extracted, only three were viable. So she was pessimistic when she showed up on Thursday morning.

She found out there were two viable embryos. She also found out some details about the donor. She had no choice in the matter. Spanish law says donors need to be matched physically to either the father, if there is one, or the mother if she is alone.

The two embryos were implanted, and she went home to wait. Two weeks later a blood test showed she was pregnant, 18 months after she had started the process.

Adele will never know the identity of the donor. Spain keeps donors anonymous. The French legislation will likely offer the option for donors to allow children to find out when the turn 18.

Desarménien appreciates the anonymity: “It was too hard for me to say to myself that there is somebody that she will maybe want to meet one day.”

She says she was called selfish, and she agrees. “That's true,” she says. “But it was what I wanted.”

Changes in France
As French lawmakers start the long process of debating the 2,000 amendments proposed to the legislation that would legalise medically-assisted procreation for all women, Desarménien is rueful.

The process of conceiving her daughter involved a lot of time, and money. The procedure itself cost 5,000 euros, out of pocket, plus about 1,000 euros in travel and lodging in Spain.

If she had been in a heterosexual relationship, she would have paid nothing.

“We don't have the same rights, so it does make me mad to say, 'Oh, they have access, and we don't',” she says. “But it's not the solution to be mad all the time. Maybe we're going to have a law, and it's good for the next generation.”

She has no regrets about going to Spain: “My daughter is here, she's wonderful. I'm thankful that maybe some friends of mine who are younger will have easier access to this treatment. It's wonderful.”

This story was produced for the Spotlight on France podcast. Subscribe on iTunes or Google podcasts.