‘The Climb’ is worth it for absurdity, sincerity and French touch 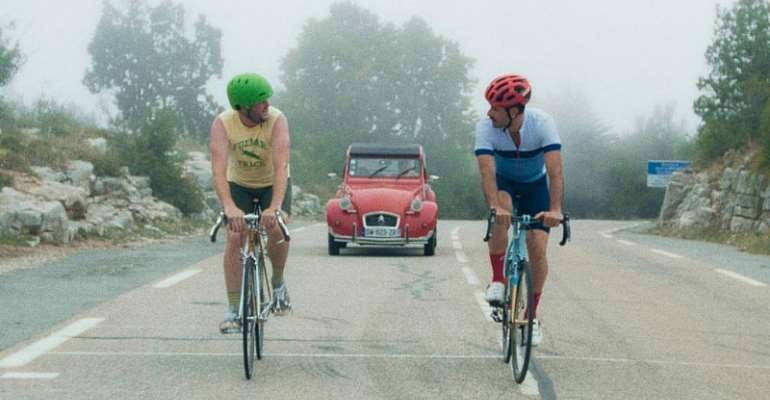 Michael Angelo Colvino's directorial debut is one out of 14 entries competing in the 45th Deauville American Film Festival. Absurd humour and ellipses may baffle some, but with French scenery, songs and impossible twists, it stays the course.

The Climb's two heroes are played by the co-writers, Colvino and Kyle Marvin.

Before this film, they were already partners in production, and Colvino shrugged off a question about wearing so many hats at one time.

It certainly didn't prevent him from pulling away from brave Kyle as they cycle up a hill in the south of France when character Mike makes his big confession: he had slept with Marvin's bride-to-be, Ava, played by French actress Judith Godrèche.

(Shamless) Mike: “I know, that's why I waited for the hill.”

They deliver their volley of lines like the Marx Brothers used to.

The film starts off on a note of painful fun, which Colvino and Marvin maintain from start to finish.

The tale, a love story for today, seems simple, and ordinary. But like life, it throws up some unexpected things. “Subverting”, is the word Colvino uses.

Behind the ridiculous fight between a mourner and a unionised grave digger lies an issue about today's society. The action moves on to the next chapter after a spin on a yellow-digging machine and gospel grave diggers.

Contrasted
Colvino and Marvin's The Climb plays on obvious contrast and discrepancy, most obviously in the two characters, Kyle is always giving in, and Mike is always pulling the cover to his side.

Kyle is gentle, forgiving, to the extreme. “In terms of my character, I think one could say that they were historically projected as feminine characteristics in film, but I didn't see it like that.

"We wanted to show that those are traits that we have and that we experience in our male friendships. They just aren't shown on screen all the time. You get a lot more machismo characters in cinema, and this is more truthful experience to our friendship.”

Listen to the interview above with Colvino and Marvin to hear more about the complexity of love and friendship in The Climb.

Yet, Mike goes to great lengths to help his friend who fortunately falls in love again. Mike's unusual action proves that if he's a helpless parasite, at least he's a symbiotic one.

Amour
France and French culture play a big role in The Climb which premièred in May 2019 in Un certain regard at the Cannes Film Festival. Colvino suggests the France bug may have begun with a personal experience, a previous French girlfriend, “a journey of discovering French culture”, and attempts to learn the French language.

True Love
Colvino comments, “We wanted to base the story in the romanticised idea of love from these two American guys' perspective. A lot of what we are spoon fed, these ideas about love and romance, certainly in cinema comes from French cinema, and none of it's real, so we created a façade to break down…so you ask was it even real what they felt?”

The message of this film, true friendship never dies. Even if best buddies want to push each other off their bikes. Moreover, loving families help make the tough climb of life a little easier, even if everyone hates your intended. Sounds like a happy ending.

Before going on general release in France, and after the screenings at Telluride and Toronto festivals in North America, The Climb is off for another European spin – to San Sebastian, where it closes the Perlak section.