By Advocacy for Biodiversity Offsetting Group 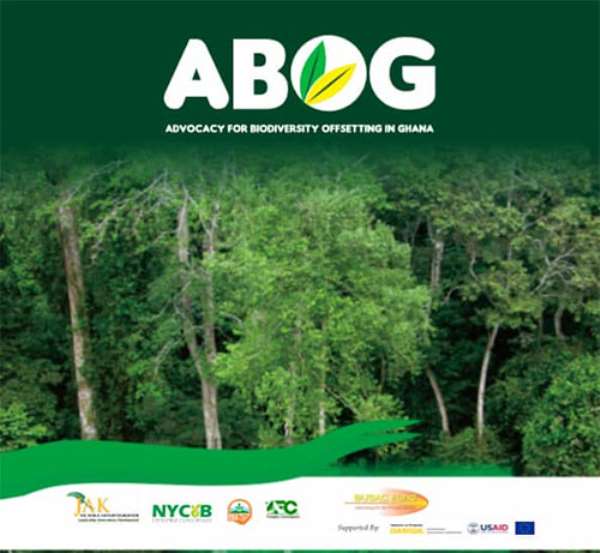 Biodiversity is the variety of plants, animals and microorganisms, the habitat in which they are found and the ways these living things interact with each other and with the environment. Until recently, Ghana has not had any methodology for accounting for its biodiversity loss and gains attributed to development projects. The absence of such a system has led to indiscriminate environmental degradation in the country, worth about US$ 850 million or 10% of Ghana's GDP (World Bank 2010). According to the 2019 Global Assessment Report on Biodiversity and Ecosystem Services of the Intergovernmental Science-Policy Platform on Biodiversity and Ecosystem Services, currently, land degradation has reduced productivity in 23 per cent of the global terrestrial area, and between $235 billion and $577 billion in annual global crop output is at risk as a result of pollinator loss. Moreover, loss of coastal habitats and coral reefs reduces coastal protection, which increases the risk from floods and hurricanes to life and property for 100 million–300 million people. Seventy-five per cent of the land surface is significantly altered, 66 per cent of the ocean area is experiencing increasing cumulative impacts, and over 85 per cent of wetlands (area) has been lost. Across much of the highly biodiverse tropics, 32 million hectares of primary or recovering forest were lost between 2010 and 2015.

A major intervention by government through the Environmental Protection Agency (EPA) towards addressing biodiversity loss in Ghana is the development of a Biodiversity Offset Business Scheme (BOBS), working with private and public sector institutions. With co-funding from the John A. Kufuor Foundation and Business Sector Advocacy Challenge (BUSAC) Fund supported by DANIDA, USAID and EU, a framework and guidelines for implementing the mainstreaming of biodiversity into all sectors of Ghana's economic development and government's decision making process was developed in 2015 – 2016.

The EPA has applied the Environmental Assessment (EA) as a major tool for the protection of the environment, biodiversity and pollution control. The Environmental Assessment Regulations, 1999 (LI1652) requires that all undertakings take into account potential impacts of their development on the environment, and institute appropriate mitigation measures to avoid, minimize, restore and offset the impact. Apart from the EA tool, there are other initiatives undertaken by the EPA and related institutions to protect biodiversity. These include the designation of Biosphere Reserves, Globally Significant Biodiversity areas (GSBA), Import Bird Areas (IBA), and the conservation of biological corridors through the Community Resource Management Areas (CREMA) concept. Despite efforts by government and stakeholder institutions to conserve biodiversity, Ghana's biodiversity loss continues to persist due to the over exploitation of natural resources, habitat conversion, invasive alien species, climate change and pollution from urban and industrial waste. This observation points to the need to critically look at how biodiversity is assessed and ensure full mitigation of impact.

The Biodiversity Offset Business Scheme (BOBS) is a public-private initiative that uses a market-based mechanism which provides incentives for private individuals, institutions, communities and entrepreneurs to create “biodiversity value” on their lands which can be traded on the market to project proponents in offsetting the biodiversity impact of their undertakings. This biodiversity value which calculated as biodiversity credits, is accessed using the developed offsetting guidelines and subsequently certified by the EPA. The computation of the credits takes into account on both the impact and offset sites, four critical elements ¬— the areas, ecosystem services provided, habitat distinctiveness and habitat conditions. The areas are measured in habitat hectares, while the ecosystem services measures parameters for provisioning, supporting, regulating and cultural services respectively. The habitat distinctiveness and condition observes the significance (either low, moderate, high and exceptional) of the habitat in terms of species richness, endangered species status, and nature of disturbance to the habitat which reflects its condition as either poor, degraded, good or excellent.

In the past year, the Advocacy for Biodiversity Offsetting Group (ABOG) has been working with various stakeholder institutions including Municipal and District Assemblies, local communities, leadership of Parliament, and the media towards increasing public awareness on the Biodiversity Offsetting Business Scheme (BOBS) and its offsetting guidelines. Some of the District assemblies the sensitization and media committees of ABOG have worked with are Fanteakwa North District Assembly in the Eastern Region; ShaiOsudoku District Assembly in the Greater Accra Region; as well as Obuasi Municipal Assembly in the Ashanti Region. These stakeholder engagements and sensitization activities are intended to shape the guidelines within the context of the country's ecological landscapes and socioeconomic situations, whilst validating the offset packages and parameters of the Ecosystems Service Index (ESI) for calculating the biodiversity credit of the impact and offset sites respectively.

The advocacy on the Biodiversity Offset Business Scheme (BOBS) as an intervention for ensuring Ghanaians benefit from the country's biodiversity and ecosystem services, will attract additional private sector investment in the conservation of biodiversity, thereby reducing biodiversity loss, promoting well-being, employment, and climate change adaptation and mitigation.

The Advocacy for Biodiversity Offsetting Group (ABOG) is a John A. Kufuor Foundation led platform jointly established in 2016 by the John A. Kufuor Foundation and NYCOB Enterprise Consortium with support from the EPA, to cultivate an enabling regulatory environment that empowers the private sector to play an active role in the Sustainable Utilization, Management, Accounting and Protection (SUMAP) of Ghana's Biodiversity Resources and Ecosystem Services. The Group's membership includes institutions such as Conservation Alliance, Private Enterprise Federation amongst others.