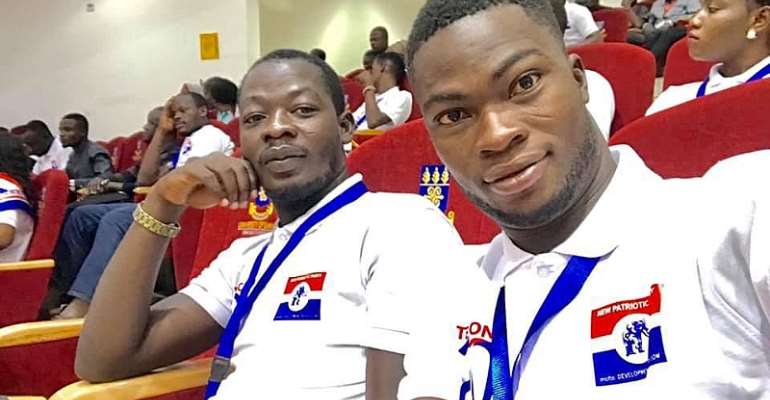 As card bearing members of the New Patriotic party that works and do always hope our party grows from great to greatest party in the whole of Africa and even beyond.

We have continually defended and propagated the good works of the party at all times and would continually do.

But our people have a saying that one criticizes what he loves and not condemn it.

So as and when there exists anything that we deem not fit we shall register our dissatisfaction for corrections to be made.

We as patriots of this great party therefore wish to bring the fore of this honourable body to petition your high office, the NPP Regional Disciplinary Committee to suspend the aforementioned executive. Our basis for this petition; detailing injurious events, activities, action(s), inactions, negligence, and utterances ranging from current to previous and remote are as follows:

Violation of the duties of a member – Article 4 (7) (a) i. Contrary to the dictates of the party’s constitution as stated in article 3 D

That without following the party’s disciplinary and grievance procedures as stated in article 4 of the party’s constitution, on 3rd September, 2019 caused and or mobilized and participated in a press conference against the government and we want the regional party executives to investigate into for suspension to be meted out.

Mr. Isaac Bafiina, the Wa Central Communication officer of the party, in the hours of about 10:05am on 3rd September, 2019, had a press conference made at the constituency office inviting all NPP communicators converged at the office and released a press against the government (Wa Municipal Assembly)

The aforementioned persons through agents and themselves gathered and insulted the government agent in the Municipality, thus the municipal Chief Officer.

Criticizing and condemning the MCE with unsubstantiated allegation is indirectly condemning the President of Ghana and putting the party to public ridicule.

The purpose of that press conference as seen on Radio stations was against the government and party decision on Mr. Isaac Bafiina.

We heard on various radio stations the vile words and all kinds insults and innuendoes levelled against the party and government.

It is our case that such press conference calling made and or caused to be made by the Communication Officer, Mr. Isaac Bafiina and his cohorts or their agents was made out of malice, ill-motivated, divisive and ultra vires their powers.

Such press conference was not sanctioned by the regional executives of the party and thus makes it supper impulsive and brash. The communication officer cannot, without the authority of the regional communication director call for a press conference or any other gathering of party members for the purpose addressing issues of the regional nature to declare his support to a candidate on public domain and condemning the government and MCE who also lacing his boots to contest the incoming Parliamentary Primaries in the constituency.

Their intend was a well laid plan to attack the person of the MCE and this has a tendency of breeding further cracks and disunity in the party going into 2020.

For a leader of an organ of the party that is supposed to serve the party’s interest to have used that same ( Communications Team) to throw a support behind some other aspirants is a recipe for division before and after the primaries because those who wouldn’t be fortunate might feel unjustly treated and we all know justice came for the sake of peace. So to ensure peace and unity within our party we must let the people have a feel of fair treatments.

Mr Isaac Bafiina and all other executives of the party here are supposed to be “referees” of this elections and therefore should not be seen siding with anyone before or as the game goes on.

Our concern has been the seat, we lost it in the 2016 elections because of these factions created by executives which caused us a divided front.

Going forward we as young patriots of the party helping to nurse our party to take over the seat from the incompetent and “Mugabian” ( Rest In Peace) NDC need all aspirants abs their ‘army’ united after the elections and that can only be done by we ensuring a fair play ground.

We can’t continue doing the same thing whiles we expect different results. We must therefore change our ways, the reason there have been conventions or guidelines to admonishing all executives to be neutral such that unity can be ensured through electoral proceedings and after.

By the said to have in the midst of all these to have gone ahead with this action suggests he has shown to be disrespectful to the party structures and does not fit to further lead us.

They (Constituency Communications Team) do not have the powers to convey such a press conference or gathering with the name of the party.

Again, Mr. Isaac Bafiina was seen and heard on Radio Waa on the said press conference that he is ready to cause the party to fall in the constituency-to wit quote -“some have been given, some of us have been given nothing, we are ready to destroy everything, we are not bothered to pour everything from the bottle so all of us suffer”. Such a statement is very dangerous and hazardous to the efforts of the party in the constituency that can cause mayhem and destroy our electoral fortunes.

It is aimed at causing defection, destructive and damaging the image of the party in the eyes of the public. We see the action(s) of the said communication officer as a misconduct. His actions were vile, dangerous and intimidating conduct against another member of the party; article 7 (a).His actions were in breach of the duty to uphold publicly Party policies: 7 (a) iv; His action was aimed at creating of discord or factionalism within the Party;7(a) and could be seen also as a v. Failure to Protect the unity of the Party – Article 3 D (ii) as the article stated.

The leadership of Mr. Isaac Bafiina as the constituency communication officer and that of other aforementioned executive have been a recipe for discord, factionalism, disrespect, intimidation and division within the party. He has created a culture of indiscipline within the party that need be corrected with a suspension to serve as further deterrent to many others.

Prior to 2016 General Elections Mr. Isaac Bafiina and his cohorts created a very huge division and discord within party that forced the regional executives to intervene and took over the campaign till the victory was won. Mr Isaac Bafiina as the then constituency finance secretary was campaigning against the then presidential candidate now the president of Ghana His excellency President Nana Addo Dankwa Akuffo Addo and some of his associates did not participate in the actual campaign and works of the party.

Prior the nomination of MCE, the communication officer, Mr Isaac Bafiina, and his cohorts the youth organiser Hanif Jaoto caused to be organized a press conference attacking and accusing the President of Ghana Nana Addo Dankwa Akuffo Addo for not appointing their favourite Municipal Chief Executive Officer and called for his suspension with no logical reason. That was after they campaigned against him in the 2016 elections as our Parliamentary candidate.

After the nomination of the MCE for the municipality, this same person openly opposed the nomination of the President and overtly and covertly caused some party members to demonstrate against the Municipal Chief Executive officer and the President and even cursed the party and the president in an open public. It will interest your committee to know that they went further to appoint some of these same people who openly opposed the decision of the party as constituency patrons and council of elders and other position. These are clear show of incompetent and negligence of duty. We refer you to an article of Radio Waa Ghana – “Wa central NPP Youth organiser and constituency officer Demonstrate against President Nana Addo Dankwa Akuffo Addo.”

This is a case of negligence and laxity-causing division and hatred within the party.

It is expected from the communication officer and his team to be seen as uniting the party by instilling discipline and respect. It is rather sad, and irritating to well-meaning patriots of this party that it’s the reverse, the case that they sit and watch whiles some party members close to them insulting and attacking other party members on social media platforms (WhatsApp Platform) of which almost all the executives are on it. These inactions by the communication officer have breed indiscipline division and tension thereby weakens the fortunes of the party in the constituency. Attached are some of the insults and verbal attacks on NPP Official WhatsApp platform.

The screenshots shall be printed and added.
Matters of law:
Judicial Precedent.
We like refer to the general maxim of law that states that “all persons shall be equal before the law” and that the doctrine of stare decisions (the judicial precedent).The force of the precedents in law is sensitive by an additional factor, the curios almost universal sense of justice which urges that all men are properly to be treated alike in like circumstances. This is in article 17(1) of the 1992 constitution that the law is no respecter of persons. That other party executives/officers and members have been suspended for the same or similar misconducts and it would be unjust to ignore same.

In Conclusion:
It is our case that the aforementioned persons have misconducted themselves for a very long time even before 2016 elections. It is very dangerous for the party if they are allowed to continue. That he being the constituency communication officer who is expected to obey and respect the structures and laid down policies and procedures of the party, should not be allowed to destroy the very same system that made them. We therefore request of you that they should be suspended from their respective positions in accordance the party’s rule and law for decency and decorum to exist in the party for its forward match.

Collins Dauda is being prosecuted for Akufo-Addo's recklessl...
11 minutes ago