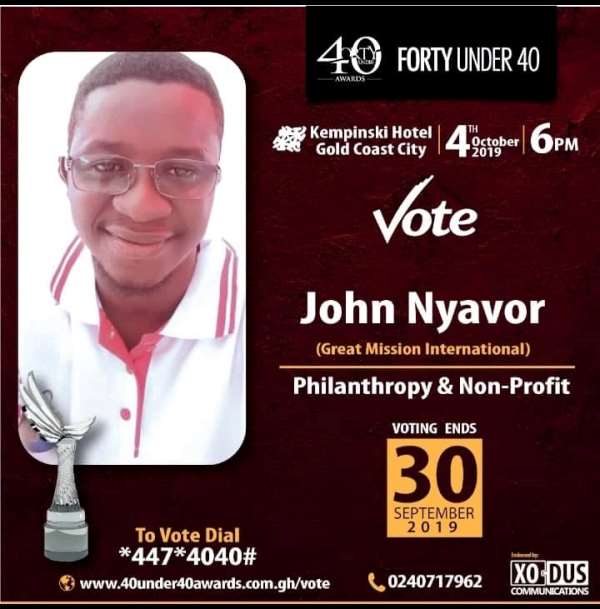 Forty under 40 Awards, is to identify, honour and celebrate a cross-section of the nations most influential and accomplished young business leaders under the age of forty from a wide range of industries , who are committed to business growth, professional excellence and community service and have risen up the ranks of their companies or industries at a relatively young age as result of this.

Mr. John Nyavor’s nomination doesn’t come as a surprise at all as his love for children and support in the rural community started in 2006 at Hodzo Wodome in the Volta Region. Since then he has established a primary school, Real Future Academy and enrolled many children.

His Great Mission International Home, takes care of over 300 orphans. He has also set up a Vocational Center where girls and boys are freely trained at Kpalime.

Mr. Nyavor also has a home at Ashaiman Lebanon in Accra where boys aged 16 and above are given the chance to education or training. He has set up an Orphanage in Togo as well.

Most of the children who passed through the Orphanage are in tertiary schools and some are working after completing school. Marvin Arthur, the oldest from his orphanage,is now a Nurse working for the Government.

As part of his generosity, Mr. Nyavor’s firm has drilled water boreholes for communities which include Mafi in the Volta Region and supports single mothers at Konyaku– a village in the Central Region

Mr.Nyavor is currently pursuing his education at Kwame Nkruma University of Science and Technology

This year’s Forty Under 40 awards will take place at the Kempinski Hotel in Accra on 4th October .