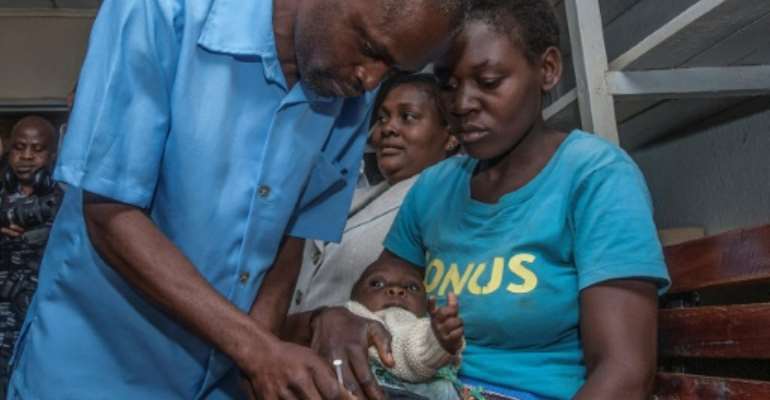 Malawi and Ghana earlier this year began their own pilot vaccination programmes supported by the World Health Organization. By AMOS GUMULIRA (AFP/File)

Kenya on Friday became the third country to start routinely innoculating infants against malaria, using the world's first vaccine to combat a disease that kills 800 children globally every day.

The vaccine -- RTS,S -- targets the deadliest and most common form of malaria parasite in Africa, where children under five account for two-thirds of all global deaths from the mosquito-born illness.

Kenya, which is rolling-out RTS,S in the western county of Homa Bay, joins Malawi and Ghana, which earlier this year commenced their own pilot vaccination programmes supported by the World Health Organization (WHO).

"This is the most advanced malaria vaccine that we have today. It has been in the making for the last almost three decades," Dr Richard Mihigo, WHO's co-ordinator of immunisation and vaccine development programme, told AFP before the Kenyan launch, which will expand to other malaria-prone areas of the country.

The RTS,S vaccine targets the deadliest and most common form of malaria parasite in Africa. By CRISTINA ALDEHUELA (AFP/File)

"Children are the most vulnerable group to this severe disease that is malaria, so protecting children can make a big impact in preventing malaria."

The vaccine will be added in these pilot areas to the other routine shots given to young children under national immunisation schedules.

RTS,S acts against 'Plasmodium falciparum', the deadliest form of malaria, and the most prevalent in Africa, where illness and death from the disease remains high despite some gains.

The shots, administered over four doses, have been shown in clinical trials to significantly reduce cases of malaria, and malaria-related complications, in young children.

The vaccine prevented about four in 10 cases of malaria and three in 10 cases of the most severe, life-threatening form of the disease, within the trial group, WHO says.

RTS,S will be considered for use more broadly as a tool to fight malaria, alongside other preventative measures such as long-lasting insecticidal nets.

The disease kills more than 400,000 people around the world every year. Of these about 290,000 were children under five.

WHO says a child dies roughly every two minutes from malaria somewhere in the world.

Most of these are in Africa, where more than 90 percent of the world's malaria cases -- and fatalities -- occur.