Russia And Ethiopia Need To Catch Up 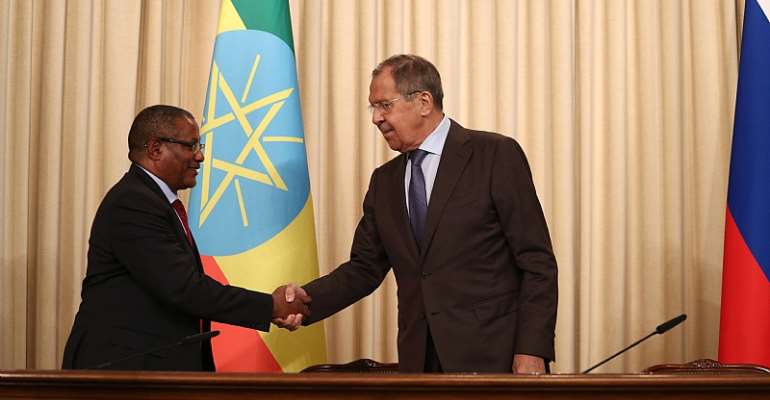 “There is a need to catch up. We agreed to hold meetings regularly,” Foreign Minister Sergey Lavrov said at a media conference after diplomatic talks with his counterpart, Gedu Andargachew in Moscow. According to official reports, Lavrov and Andargachew held wide-ranging talks that were constructive and substantive and focused on broadening cooperation between Russia and Ethiopia.

Ethiopia is one of Russia’s main partners in Africa for over 120 years. The traditions of friendship, mutual respect, trust and support that have developed over this period of time and make up the basis of relations today. Both countries are tied by years of solidarity with the African countries in their fight for independence and decolonization. The creation of the African Union headquartered in the capital of Ethiopia, Addis Ababa, was the culmination of the decolonization processes in Africa.

Throughout their partnership, they have gained extensive experience in mutually beneficial cooperation that meets the interests of both countries in various areas. As a result, Lavrov said they both agreed to stimulate the work of the joint economic commission and to encourage it to implement joint investment projects across a variety of fields, including energy, such as hydrocarbon energy, hydroelectric energy, and nuclear energy.

They further noted the importance and interest of companies such as Rosatom, Inter RAO, GPB Global Resources, Russian Railways, KAMAZ and UAZ in working in Ethiopia.

There is a potential for cooperation between Russia and Ethiopia in science and education. Russia pledged to support biological research under the Joint Russian-Ethiopian Biological Expedition, which has been operating there for more 30 years.

Many Ethiopian students study at Russian universities, including civilian universities and those operated by the Defence Ministry and the Interior Ministry. Russia will expand this practice. And at the request from the Ethiopian government, Moscow will conduct two specialized courses for Ethiopian diplomats at the Foreign Ministry’s Diplomatic Academy next year.

With regard to other promising areas of interaction, which has a rich history, include military-technical and military cooperation. Ethiopian Minister of National Defence, Aisha Mussa, took part in the talks as part of the delegation. The discussion was about agreeing on additional regulatory documents that will allow more to promote effective cooperation in supplying military equipment and in other areas.

Lavrov and Andargachew exchanged views on regional and global questions. “We are on the same page on most issues, consistently advocate for strengthening fair and democratic principles of international relations, and searching for collective answers to large-scale challenges and threats, and respecting the right of each nation to independently determine its future,” top Russian diplomat said.

With regard to the African countries and the African continent, Lavrov and Andargachew strongly support the idea that Africans should have the decisive role in deciding on the paths to resolve African problems. There is no alternative to resolving these crises, or crises in any other part of the world, through peaceful political means, while relying on an inclusive national dialogue. The situation in Africa and the goals that need to be vigorously addressed in order to overcome several crises and conflicts, primarily, on the Horn of Africa, South Sudan and Somalia.