Tunisia: cradle of the Arab Spring 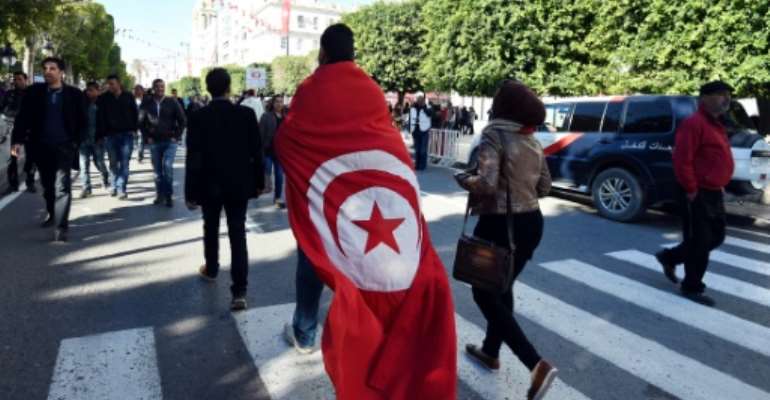 The anniversary of Tunisia's 2011 revolution is marked with rallies. By FETHI BELAID (AFP/File)

Eight years after triggering the Arab Spring, Tunisia is held up as a model of democratic transition, while other countries that experienced the mass uprisings are gripped by chaos, repression or war.

Despite the plaudits, the North African country of more than 11.5 million people is still struggling to tackle tough economic and social issues.

Here are some key facts about Tunisia ahead of September 15 elections to replace president Beji Caid Essebsi, who died in July:

Tunisia, a French protectorate since 1881, gained independence in March 1956.

A year later, it was declared a republic with Habib Bourguiba as its president.

After several decades of authoritarian rule, doctors declared the elderly and ailing Bourguiba unfit to rule in a 1987 bloodless coup.

Ben Ali was then elected and regularly re-elected every five years.

After deadly protests over unemployment and high prices rocked the country, Ben Ali fled the country for Saudi Arabia on January 14, 2011, after 23 years in power.

At least three hundred people were killed in the revolt, which sparked the Arab Spring uprisings across the region.

In January 2014, lawmakers adopted a new constitution after two years of political turmoil, which exposed a deep rift between Ennahdha and the secular opposition.

In October, the secular Nidaa Tounes party came out on top in legislative polls, beating Ennahdha.

Tunisia is considered a pioneer in North Africa and the Middle East when it comes to women's rights.

In 2016, the International Monetary Fund approved a four-year loan of $2.9 billion for Tunisia, in exchange for pledges to impose austere economic reforms.

The IMF recently expressed concern about slowing growth and called on Tunis to step up reforms.

Holidaymakers have started flocking to Tunisia once more, after a series of deadly jihadist attacks in 2015. By KENZO TRIBOUILLARD, - (AFP/File)

Phosphates are a strategic sector for the economy, but their production has been hindered by recurring social unrest.

The country is also one of the world's leading producers of olive oil.

Holidaymakers have started flocking to Tunisia once more, after a series of deadly jihadist attacks in 2015 throttled the tourism industry.

They include the medinas of Tunis and Sousse and the archeological site of Carthage, the ancient rival of Rome, in the north.

Tunisia has several sites on UNESCO's World Heritage list, including the archeologic site of Carthage. By FETHI BELAID (AFP/File)

The holy city of Kairouan and El Jem, whose Roman colosseum ranks among the finest in the world, are also on the list.

The capital's Bardo Museum, which hosts objects tracing Tunisia's history spanning several millennia and civilisations, is famous for its exceptional collection of mosaics.

A massive arts and entertainment complex in Tunis known as the Cite de la Culture was inaugurated in 2018.