Five things to know about the Tunisian presidential poll 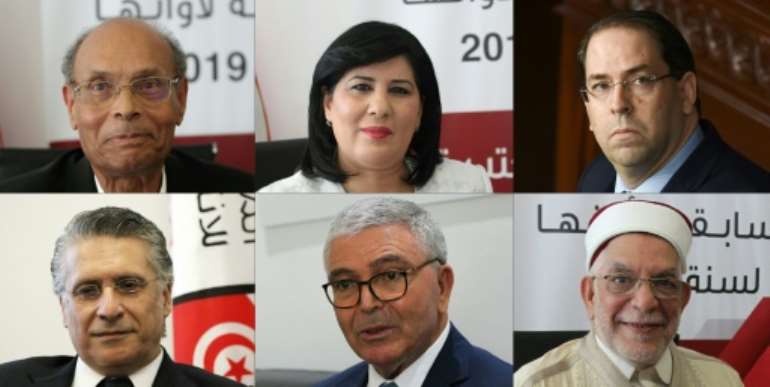 Here are five things to know about the Tunisian presidential election set for September 15:

Who are the candidates?

Of 98 nominees, 26 candidates were confirmed by the Independent Higher Authority for Elections (ISIE) -- roughly the same number to enter the race in the 2014 presidential campaign.

Three of the candidates have been prime minister, including the serving head of government, Youssef Chahed.

Chahed is also one of eight candidates that were members of, or aligned with, the Nidaa Tounes party, victors of the 2014 poll.

A motley coalition under an anti-Islamist banner, Nidaa Tounes has since been riven by internal conflicts and has not put forward a candidate, but is backing defence minister Abdelkarim Zbidi.

The Islamist-inspired party Ennahdha is vying for the top job for the first time, putting forward as its candidate one of its least divisive figures, Abdelfattah Mourou.

Interim speaker of parliament since July, Mourou is seen as a moderate who advocates more openness in the party.

It is still anyone's game, as uncertainty reigns just days before the vote.

ISIE banned the publication of opinion polls, but according to circulating studies, media magnate Nabil Karoui, in prison since August 23, is a possible favourite.

Under investigation for money laundering after a complaint lodged in 2016, Karoui was arrested days before the start of campaigning, prompting accusations that the timing of his imprisonment was a manipulation of justice.

After Karoui, many candidates appear to be neck and neck, like Chahed and Zbidi or Mourou and Moussi.

Kais Saied -- a conservative academic and political neophyte -- has also made a mark, despite lacking partisan support.

But many voters remain undecided, rendering all predictions perilous.

Of the 8.9 million Tunisians of voting age, more than 7 million are registered to cast a ballot -- a record number, thanks to vigorous efforts by ISIE.

The election body has registered 1.5 million new voters, including many women and young people.

But abstentions, which stood at 35 percent in the first round of the 2014 election, have been high in recent polls, touching 65 percent in the municipal elections of mid 2018.

When will we know the outcome?

The election was initially set for November 17, but was brought forward to September 15 after the death of sitting president Beji Caid Essebsi in July, a few months before the end of his mandate.

In order to complete the electoral process on time, a law was passed in the summer to reduce the window for candidate appeals.

The date of the second round of voting will not be known until after the first, but it will take place on a Sunday before October 25.

According to ISIE, the second round could be held on October 6, the same day as the legislative elections, or on October 13 or 20.

The results will be announced in the days following the polls, with the transfer of power expected to take place within weeks.

Tunisia has a mixed parliamentary system, and in theory, presidential powers are limited -- essentially covering defence and diplomacy -- even though the head of state is the guarantor of the constitution and can submit bills to parliament.

But on multiple occasions, Essebsi exceeded his powers and went further to call for the strengthening of presidential prerogatives.

Several candidates are in favour of this move, despite Tunisia's decades-long experience of unchecked presidential regimes.

However, the subsequent legislative vote will be the key determinant of Tunisia's political landscape.

It is uncertain whether voters will decide to amplify the presidential choice in the legislative polls, or steer parliament in a different direction.

Fuel price hikes: When did you realise you don't control oil...
7 minutes ago