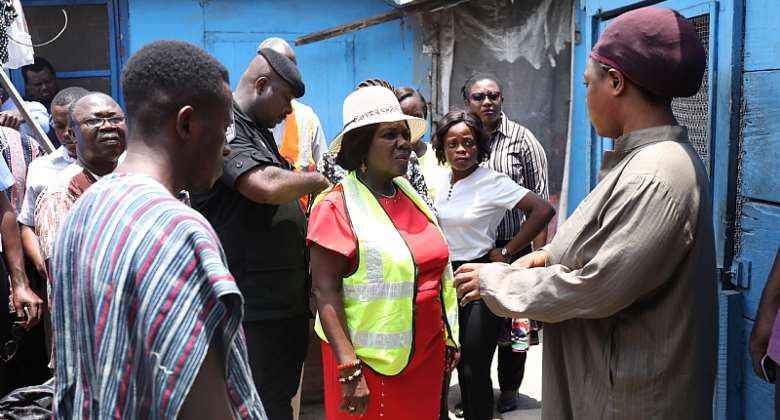 As part of President Akufo-Addo’s vision of making Accra the cleanest city in Africa, Sanitation and Water Resources Minister, Ceceilia Dapaah has appealed to vendors at the Ayawaso North Municipal Assembly to support the idea of keeping the market and its environments clean.

According to her, keeping the markets and its environments clean will protect the lives of vendors and buyers against diseases such as diarrhea, cholera among other diseases.

Addressing the media after a tour to some markets in the Ayawaso North Municipal Assembly, the Minister said “My Ministry is one sector being closely monitored by President Nana Addo Dankwa Akufo-Addo whose aim is to make Accra the cleanest city in West Africa by the end of his first term.”

She added that she will be partnering with major leaders from the different Assemblies in ensuring that the dream sees the light of day.

President Akufo-Addo in February this year stated that he is embarking on a mission of dealing against filth and making Accra the cleanest city in Africa while delivering his State of the Nation Address.

It is on this note that after touring the Accra Waste Management Unit, the James Town Slaughter House, the Agbogbloshie market, the Korley Klottey Municipal Assembly and the Ayawaso West Municipal Assembly, the Minister was confident, residents, hawkers; drivers among other will adhere to the president call and her message accordingly.

The Sanitation Minister made a stop at the leader of the Council of Muslim Zongo chiefs, Sariki Moro Baba Issah, where she tasked him to ensure his followers play major roles in making Ayawaso North Municipal Assembly the cleanest.

Chief Sariki Moro Baba Issah used the opportunity to appeal to the Minister to address the long-term drainage system problem facing the community.

Hon. Cecilia Dapaah said, “Aside the President’s vision, I am also calling for one bin, one household initiative as well as each house having its own toilet facility for tenants.”

She assured the MCE of enough support in the coming months.

'We will stand united to oppose e-levy' – Haruna Iddrisu but...
53 minutes ago