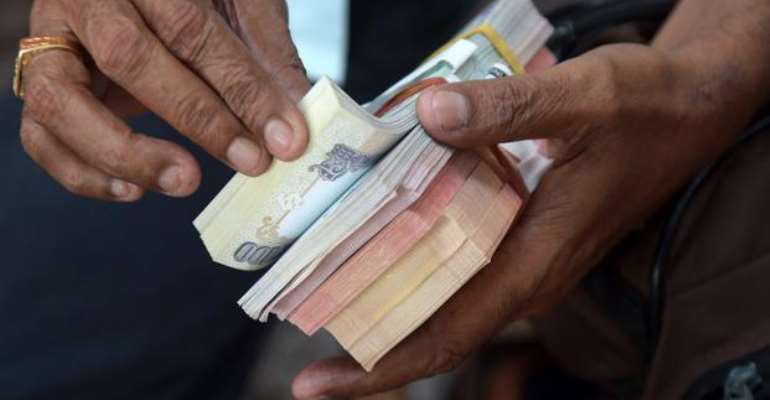 It has been, as former President Kufuor once put it, " with us since Adam".

It has been one of the reasons given for every coup.

It has cost one Head of State his job and 3 others-- their lives.

It has been a key issue in every election under the 4th Republic, fuelling every opposition campaign and crippling every government.

And yet, it continues to grow from strength to strength.

Spurred by the PPA scandal, corruption has once again, taken centre-stage in our national debate.

Naturally, the President and his government have been under some pressure.

In response, the President has delivered a speech, to the Ghana Bar Association , touting the achievements of his government in fighting corruption and asserting that it is not his job to determine the guilt or innocence of those accused. He asserted that the attempts to taint his incorruptible image, by his detractors, would not work.

It is hard to watch the exchanges of the last week without feeling sorry for the President, whose backers resorted to quoting the NDC's Allotey Jacobs to buttress their claims to incorruptibility while Gen. Secretary John Boadu reiterated the commitment of the NPP to the use of institutions in the fight against corruption.

Mr. President, Allotey Jacobs was lying and the repeated scandals are denting you image of incorruptibility.

In recent weeks, the National House of Chiefs, the Church of Pentecost, Reverend Awotwi Pratt, a diplomat and your own Senior Minister, Hon. Yaw Osafo Maafo, have complained in diverse ways about the harm corruption is doing to Ghana. All these institutions and people cannot be your detractors. They cannot all be wrong.

Perhaps, the only voice missing is that of former President Rawlings, whose signature tune, used to be "probity and accountability ". The man who had people shot without documentary evidence of any crimes now cannot find time to read evidence present in the public domain. He has been, drip by drip, incident by incident, from Ghacem, through Mabey and Johnson, the "donkomi" privatizations to the Abacha money, losing his credibility. Now, he has none.

While you are right that it is not your job to prove innocence or guilt and may be commended for your apparent commitment to due process, you and your apologists are missing the bigger picture. The constitution vests executive power in you and tasks you with upholding our constitution and laws. Your "botro-bojo" attitude ignores the rights of those who lack good roads, die in our hospitals due to no-beds, live in filth, and live in poverty-- all because of corruption. You are the person who chooses the leaders of the institutions John Boadu and Ghanaians expect to fight corruption. They cannot fight corruption because, your excellency, they are corrupt. The sad fact, Mr. President, is that in most cases, your appointees have made those institutions, not less but more corrupt.

The question of your responsibility was settled in the 14th Century by William of Pagula who concluded, "For one who permits anything to take place that he is able to impede, even though he has not done it himself, has virtually done the act if he allows it."

We need a conversation and action that would go beyond trading accusations and lead to substantive actions that would lower corruption significantly.

We cannot have a serious conversation that does not involve our parties and the role of money in our elections-- both internal and external.

We cannot be serious about fighting corruption if we do not reform our duties and tariffs and revenue collection.

We cannot tackle corruption without some painful conversation and reform of our police, CHRAJ, SFO, SPO and the Attorney Generals department and how they hear of and see no corruption even as Anas and Manasseh and others on shoe-string budgets keep finding corruption.

We cannot address corruption without addressing a judiciary that puts goat thiefs in prison while selling everything including our elections.

Let our churches stop honouring unaccounted wealth in its activities and they will strike a blow.

And let the Diplomats encourage their countries to enforce their anti-corruption laws against multinationals that corrupt us, compel their banks to expose ill-gotten wealth in their accounts and stop celebrating the corrupt in their midst and it shall be well. The diplomat was right. We can never be beyond aid till we get beyond corruption.

And all of us, consistent with the President's call to be citizens, must stop honouring those whose wealth are from corruption in our daily lives.

To those in government who complain privately while making public excuses, your silence and inaction would be held against you. Your silence makes you complicit, just like the silence of good NDC members made them complicit in the NDC regime's corruption.

Finally, Mr. President, by permitting corruption, you are retarding our journey to Ghana beyond aid and destroying your beloved party , the NPP, for a generation, like the CPP did to itself.