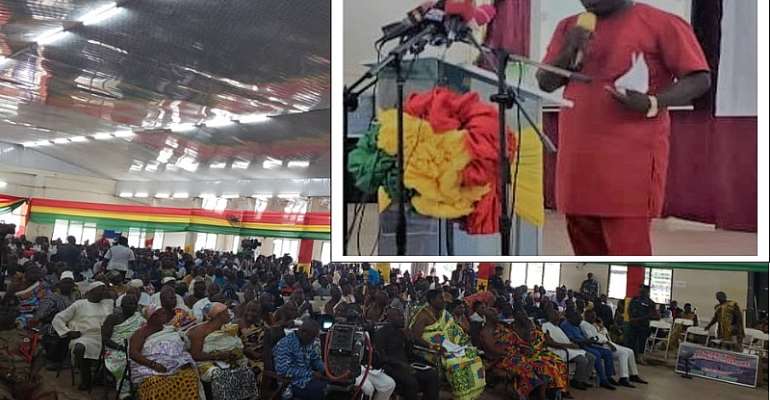 The Atebubu-Amantin municipality was the toast of a gathering at the maiden edition of the Bono East regional Town Hall Meeting held at the Valley View University in Techiman last Monday.

The 2 part programme consisted of a pictorial exhibition of development projects by each of the eleven districts and municipalities within the region as well as brief power point presentations by the respective chief executives.

The intense applause that met the Atebubu-Amantin presentation underscored the hard work the municipal assembly led by the chief executive Hon. Edward Owusu has done from the inception of the current administration.

The municipality appeared to have undertaken more development projects compared to other districts some of whose revenue base far outweighs that of Atebubu-Amantin.

Of particular interest to even colleague MMDCEs was the number and magnitude of projects undertaken using internally generated funds IGF while others heaped praises on the MCE and the assembly for a good job done.

The IGF projects include a fully furnished 40 bed capacity female ward and pavilion at the Atebubu hospital, a court complex under construction, completion of an office accommodation for the National Health Insurance Authority, rehabilitation of the Atebubu main market, gravelling of some Atebubu township roads and parts of a street lighting project among others.

The meeting which was under the theme ‘accounting for financial sector resolution, jobs and agriculture’ had the minister for Information Hon. Kojo Oppong Nkrumah, Mr. Ignatius Baffour Awuah, minister for Employment and Labour Relations, a deputy minister of agriculture Dr. Sagre Bambangi and the Bono East regional minister Hon. Kofi Amoakohene addressing the gathering.

The Chief Executive Officer for the Nation Builders Corps Dr. Ibrahim Anyars and his counterpart from the National Food and Buffer Stock Company, Mr. Hannan Abdul Wahab as well as a representative from the Bank of Ghana also threw light on job creation, measures put in place towards food security and moves to sanitize the banking sector in the country.

Participants asked varied questions bothering on agriculture, sanitation, employment among others to which answers were provided.

The function was chaired by the Omanhene of the Techiman traditional area Nana Oseadeyo Akumfi Ameyaw IV.