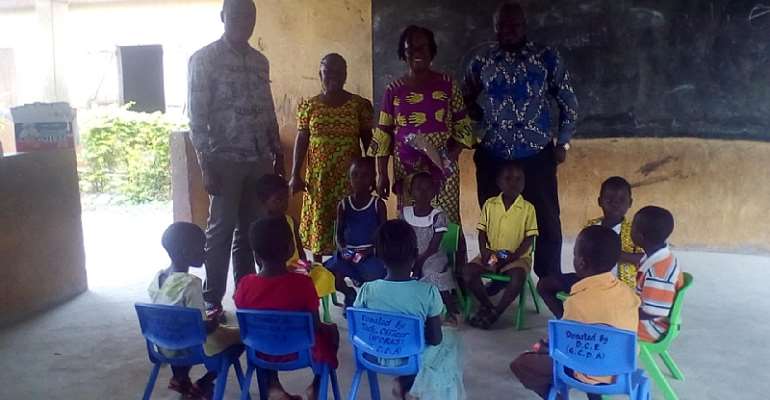 District Chief Executive (DCE) for Gomoa Central, Hon. Benjamin Kojo Otoo has bemoaned alarming poor BECE results among boys who wrote the BECE in 2019 but however lauded their female counterpart for brilliant performance

" Results trickling in shows that our girls are doing better compared to the boys. So far the least aggregate recorded from 38 girls in separate schools is Aggregate eleven (11) the rest are between aggregate 6 and 8

In a particular school, the best Aggregates were scored were all girls with the boys lagging behind. It means that the Girl-Child Education is going on well in the country especially in the Gomoa Central District.

The time has come for us as a nation to mount serious campaign on Boy-Child Education as well before they become a burden to the society.

And going to launch Boy-Child Education campaign in the District and would Champion its cause. Our boys ought to take their studies seriously" Hon. Benjamin Kojo Otoo noted.

The DCE disclosed these when he visited some selected schools in the District as part of 'My First Day at School' ceremony to welcome the new entrances to their classrooms.

Hon. Benjamin Kojo Otoo further stated that the Assembly has created conducive environment in all the schools in the District for effective teaching and learning adding the pupils should take advantage to better their educational standard.

" Even though school infrastructure development is not the best however, but it's not all that bad. Every school has what it takes to enhance teaching and learning. The only challenge is with furniture. Some of the school lack enough furniture thus creating congestion in the classrooms.

With financial support from the Member of Parliament for Gomoa Central Hon Naana Eyiah, the Assembly is hoping to resolve it this academic year. We have gathered sizable number of dual desks and would be distributed to the schools.

While government is doing its best to ensure infrastructure development, I want to appeal to parents in the District to supplement government's efforts by providing the needs of the children and to motivate them"

The DCE stressed the need for a bigger platform for the Boy-Child Education campaign adding the nation was gradually losing its men who would take up the mantle of leadership positions near the near future.

" Am extremely happy about brilliant performance of our girls but caution should be taken that if boys Boy-Child Education drops, then we are in serious trouble.

The rates at which boys at their tender age patronize internet cafes especially in the night is very alarming. There is the need for all hands to be on deck eradicate this social canker.

These boys prefer cafe to their books. I want to appeal to Nananom, parents and all stakeholders to combat this menace which would breed criminals if serious actions are not taken.

I pray that the Girls would be able to sustain these performances to Senior High Schools and beyond. The government would provide the needed support to enable every child of school going age attain height in the educational ladder"

They visited Awombrew D/A Basic School where the DCE on behalf of the Gomoa Central District Assembly presented sizeable number of plastic chairs to the Kindergarten Department to welcome the new entrance to the schools assuring them that government was committed towards quality educational system.

Each pupil given pencils, erasers some biscuits and assorted drinks to ginger them to their new abode. Hon. Benjamin Kojo Otoo additionally gave Two packets of roofing sheets to the School Authorities to support school maintenance.

He noted that the Assembly would continually support the schools with the needed logistics to enhance teaching and learning adding as Headteacher himself, he would spearhead infrastructure development in all the schools in the Gomoa Central District.