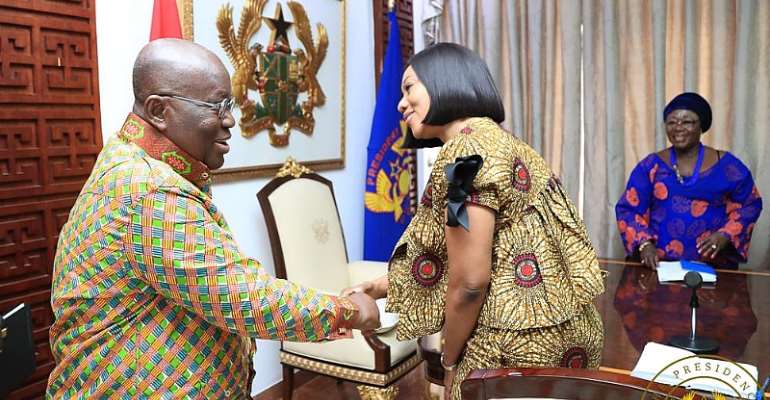 President Akufo-Addo says he does not need the help of the Electoral Commission to win an election in the country.

President Akufo-Addo made those remarks on Thursday, 12th September 2019, when the Electoral Commission, led by its Chairperson, Mrs Jean Mensa, paid a courtesy call on him at Jubilee House, as part of a series of consultative meetings being held with stakeholders of the electioneering process.

President Akufo-Addo stated that, to have an Electoral Commission that is partisan or open to manipulation is essentially striking the heart of the democratic system of the country.

According to the President, “what the ballot should do is to present an unvarnished verdict of the will of the Ghanaian people. That is what should take place of any well-functioning democracy; that the ballot represents a fair, clear statement of what wishes of our people are.”

He added that, “If there is any interference with that, it is a distortion of the popular will, and, that, therefore, means that the democracy that you seek to advance itself becomes questionable.”

The need for a commission of integrity, a commission that is not the subject of manipulation by anybody, President Akufo-Addo stressed, is absolutely vital to the direction which the Ghanaian people have decided to go, i.e. the attachment to multi-party democracy.

Touching on the key reforms being undertaken at the Commission, the President was glad to hear of measures underway to institutionalize the role and operation of the Inter-Party Advisory Committee (IPAC).

He said IPAC, since its institution somewhere in 1996, has provided a welcome platform for all political parties to have their say and discuss with the commission directly matters as stakeholders, institutionalizing them is very important.

On the EC’s suggestion to persuade political parties to merge, the President said “I am not so sure that encouraging parties to merge is a part of the functions or remit of the electoral commission”, adding that “those decisions, I believe, are for the parties; yours is to provide the regulations and the ambit within which the parties can operate.”

He described as important the efforts the Commissioners of the Electoral Commission are making to strengthen the EC, enhance its institutional capacity, and control its own processes. EC was a free-for-all institution

On her part, the Chairperson of the Commission thanked President Akufo-Addo for the support they had received since their appointment, adding that “for the first time in our history, we had you intervening in the release of our budget to us. So, this, year, we have been able to carry out our mandate smoothly.”

She continued, “Since you appointed us into office a year ago, we have been doing our best to ensure that the ideals and mandate you gave to us are achieved. We want to assure you that we are committed to peaceful, transparent and credible elections. In all our dealings, we have Article 45 of our Constitution as our guiding light.”

In giving an account of their stewardship, the EC Chair noted that the conduct of the Referendum for the creation of the new regions, the by-election at Ayawaso West Wuogon, setting up a security taskforce ahead of the 2020 elections, and the authoring of a draft report for the implementation of the Representation of the Peoples' Amendment Act (ROPAA), are among the things that have caught the attention of the EC over the course of the last year.

In addition, she noted that IPAC had been institutionalized, with meetings held once every month to develop an agenda for constructive dialogue. The EC, she noted, has also been engaged in streamlining the activities of the political parties to ensure parties submit their audited reports in a timely manner.

Whilst acknowledging the work done by her predecessors, Mrs Jean Mensa noted that she inherited a very weak institution.

“It is an institution that is not founded on rules, is not founded on administrative policies, does not have a governance framework. We came into office and found out that we do not have a single policy to guide procurement, to guide finance, to guide human resource, nothing exists. In a nutshell, the Commission has existed as an election machine, and over the year we have spent a lot of efforts to plug the loopholes to the best of our ability. It has been run as a free for all institution,” she explained.

The EC Chair told President Akufo-Addo that the backlog of promotions of staff has been undertaken, thereby boosting the morale of staff, as well as the introduction of policies and guidelines to structure and regulate the operations of the EC.