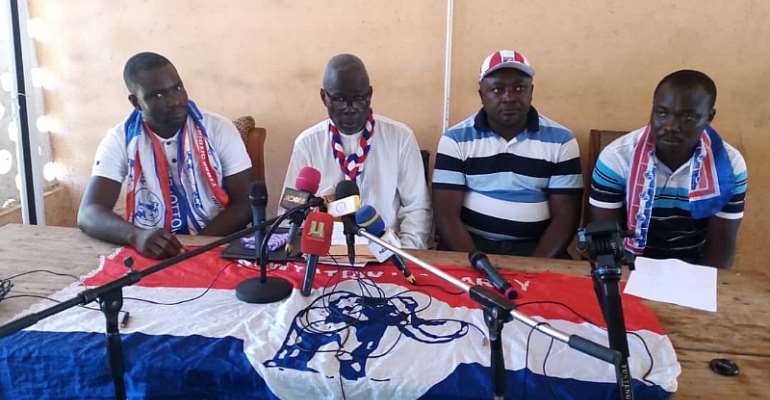 The New Patriotic Party (NPP) would have its parliamentary primaries in all orphan Constituencies in the country on Saturday, September 28, 2019.

Since 1992, the New Patriotic Party (NPP) has not won the Ellembelle parliamentary seat before except on an alliance.

The seat, is currently occupied by the NDC's MP, Emmanuel Armah Kofi-Buah who annexed it in 2008.

The current District Chief Executive (DCE) for Ellembelle, Kwasi Bonzoh has been running unopposed for the NPP since 2012 but this time around, he is facing tight competition.

All four aspirants who picked forms to contest the primaries were subsequently vetted in Takoradi.

But, the National Parliamentary Vetting Committee (NPVC) of the party later disqualified the business mogul, Mr. Joseph Apor Adjei from contesting in the parliamentary primaries without any tangible reason.

Mr. Apor Adjei has however petitioned the party, but no reason has been given so far to him by the leadership of the party.

The party has therefore cleared three aspirants to contest in the Ellembelle NPP parliamentary primaries on September 28, 2019.

But, speaking at a press conference, the Campaign Manager for Ellembelle DCE, Stephen Yaw accused the National Chairman of the party, Freddie Blay of disqualifying Joseph Apor Adjei to pave way for his preferred aspirant to win the upcoming primaries.

He added that Freddie Blay campaigned openly for the incumbent Constituency Chairman during the Constituency Executive Elections last year.

In this regard, the DCE die hard follower is accusing Freddie Blay of using his position to disqualify Mr. Joseph Apor Adjei.

"Immediately after the disqualification of Mr Joseph Apor Adjei from the race, Freddie Blay came to his hometown, Eikwe to jubilate and luckily for me, I was there and Freddie Blay used a white handkerchief to jubilate and at that moment the Constituency Chairman was there with some selected Executives", he claimed.

He, therefore, expressed displeasure on how Freddie Blay was imposing the Western Regional Treasurer of the party, Anna Akaisi Hormah Miezah on them to be elected as their 2020 parliamentary candidate.

Speakers upon speakers including the Campaign Manager disclosed that Freddie Blay's preferred aspirant was not a registered voter in Ellembelle and had never voted in the Constituency before.

He said she was a registered voter at Madina and doesn't have the right to contest in Ellembelle NPP parliamentary primaries.

He seized the opportunity to urge the National Executive Committee (NEC) of the party if possible, to disqualify the Western Regional Treasurer of the party from constesting in the Ellembelle NPP parliamentary primaries.

Some angry supporters of the DCE who later spoke to the media emphasized that Freddie Blay was imposing the Western Regional Treasurer on them.

They vowed not to campaign for the Western Regional Treasurer if she emerges victorious in 2020, adding that the Treasurer was untruthful being, and was using double names.

They chanted that "No Ellembelle DCE as our parliamentary candidate, no vote for NPP in 2020. We can never campaign for Hormah Miezah who is going round peddling lies that she had voted before in Ellembelle".

They promised to report the Regional Treasurer of the party to the police to arrest her for allegedly using for going round that she was the registered voter of Ellembelle Constituency.

Since 2017 when the NPP assumed power, the party in Ellembelle has never enjoyed peace. The party has been divided into two camps thus the DCE camp and Constituency Chairman camp.