Zimbabwe's farmers look back at 'hell' under Mugabe 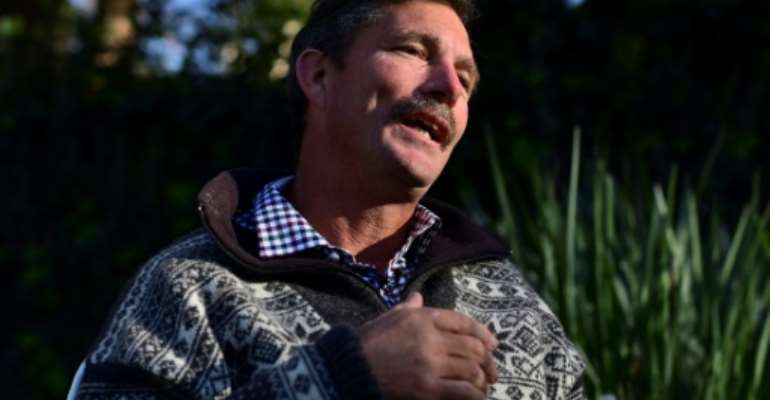 At its zenith, the Mount Carmel farm in northern Zimbabwe boasted 500 livestock and shipped its mangoes and lemons to Europe, a continent away.

In 2009, that halcyon time ended abruptly when the farm was seized by thugs operating in the name of Robert Mugabe's land reform.

He is among the thousands of white farmers violently evicted by Mugabe's land reform policy, which almost at a stroke turned Zimbabwe from a bread basket into a basket case.

He was toppled by his former military allies in 2017, ending a 37-year rule marked by political repression and economic mismanagement, and leaving a nation torn over his legacy.

Sinos Mlauzi, a black Zimbabwean who used to work for a white farmer who was evicted under ex-leader Robert Mugabe, still has scars from the violence. By TONY KARUMBA (AFP)

"Before we had an orchard, now it's a forest," said Sinos Mlauzi, a black Zimbabwean who used to work for Freeth.

"When I heard Mugabe died, I was overjoyed," he said, lifting his cap to show scars left from 2009. "He took away our means of subsistence."

Two dismembered tractors lie in a shed, while a pickup truck outside is riddled with bullet holes.

Brick ruins and an empty swimming pool are all that remains of the Freeths' luxurious farmhouse, which was torched.

Freeth, 50, recalls the six months of "hell" he and his family suffered as mobs repeatedly attacked his property.

"(Mugabe's followers) kicked down the front door and dragged blazing tires inside," said Freeth, sitting in the lush gardens of the house he now occupies in Zimbabwe's capital Harare.

"They were banging on oil drums outside the house. They were threatening my children."

Freeth's employees were beaten with steel rods and his parents-in-law were seriously injured.

A former employee of the Mount Carmel farm who lost his leg in the violent eviction of the white owner. By TONY KARUMBA (AFP)

The violence culminated on August 30, 2009, when the Freeths returned from church to find their house was in flames.

Mugabe's land reform was launched in 2000 to re-distribute land awarded to whites during British colonial rule, which ended with Mugabe's election in 1980.

But the brutal eviction of white farmers, and their replacement by people who often had negligible skills, capital or experience in agriculture, caused a collapse in output, and with it Zimbabwe's economy.

"We have the best climate in the world and we are no longer capable to feed our population," said Freeth.

One third of Zimbabweans are dependent on food aid, according to the United Nations.

Hundreds of farms were placed in the hands of Mugabe's allies and of underqualified, poorly-equiped farmers.

The workforce of 150 employees shrank to less than a tenth of its size, said Mount Carmel's newly-appointed manager, Simon Shema.

The brutal eviction of white farmers caused a collapse in output, and with it Zimbabwe's economy. By TONY KARUMBA (AFP)

"Us blacks, we had no land to cultivate. Mugabe gave us the opportunity to farm," Shema told AFP.

He said he would be heading to Harare for Mugabe's funeral on Saturday to "thank him".

Surrounded by broken-down machinery, Shema was convinced the farm would be running within the next two months.

Paprika, peas and corn would be planted. And the mangoes on the trees -- yellowed from the lack of irrigation -- would be exported.

"We will start small, and grow," said Shema.

Although ZANU-PF acknowledged some of the failures of Mugabe's land reform, it said the benefits were still to come.

"Around 30 percent of the seized lands are not being used," said Tatenda Gwinji, a ZANU-PF representative in Chegutu. "We are heading in the right direction."

Of the 4,200 white farmers counted in Zimbabwe's last population census in 2000, only 400 work land in Zimbabwe, according to Freeth. By TONY KARUMBA (AFP)

Freeth's former workers have been unemployed for the past decade.

"Once the white farmer had left, my children had to stop going to school because we had no money to pay for their fees," he said. "Mugabe stole their education."

"The (land) reform did not accomplish the desired objective," said Mlauzi. "And Mugabe caused productive farmers to flee."

Of the 4,200 white farmers counted in Zimbabwe's last population census in 2000, only 400 work land in Zimbabwe, according to Freeth.

Hopes raised by the change in regime were rapidly quashed.

Mugabe's successor President Emmerson Mnangagwa pledged to revive the economy, but "prices are soaring and our lives are even more difficult," said Mlauzi.

Mugabe's death was a "non-event", said Freeth. "His legacy is still alive. A legacy of injustice, of absolute power and violence."

Behind him, a cross pays tribute to Freeth's father-in-law, buried in a farm he can no longer access.